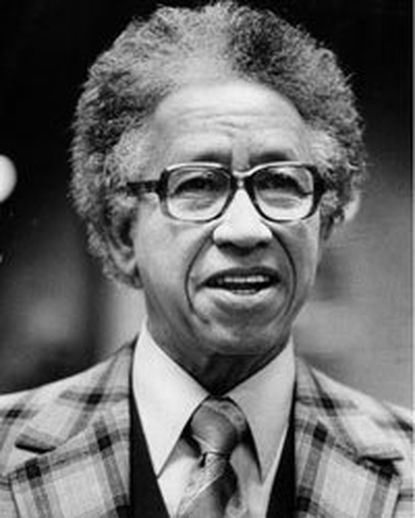 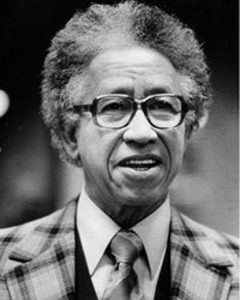 William Lloyd Adams (1914-2011) was an African American businessman. Born in Zebulon, N.C., William Lloyd “Little Willie” Adams arrived in Baltimore in 1929, when he moved in with an aunt and uncle on North Bond Street.  He attended Dunbar High School for a time. During the Depression, he worked in a rag factory, delivered newspapers, repaired bicycles and operated a shoeshine parlor. He earned a reputation for shrewdness when it came to handling and saving money, virtues that would serve him well later in life. At 16, he became a low-level runner for an illegal lottery operation. Adams himself became a numbers boss.

By the late 1930s, Adams was proprietor of Little Willie’s Tavern at Druid Hill Avenue and Whitelock Street. In 1935, he married the former Victorine Quille, who had been a city educator before entering politics. Philadelphia gangsters, according to newspaper accounts at the time, bombed the tavern in 1938, allegedly.  Adams’ wealth was grounded in the illegal lotteries that he operated. He once boasted that he handled $1,000 a day $8,000 in today’s money in illegal lottery operations. In 1940, Adams added to his business interests when he founded Adams Realty Brokers in the 1500 block of Pennsylvania Ave.  Also during that time, Adams brought Henry G. Parks Jr. to Baltimore and the two men bought into a Cleveland sausage firm.  The men disagreed on an expansion strategy with the majority owner, and Mr. Parks, with Mr. Adams’ financial help, moved to Baltimore, where he established Parks Sausage Co.  He attended night classes at Douglass High School, from which he earned a diploma in 1950. He later studied at the Cortez Peters Business School and took night courses at Morgan State University and the McCoy College at the Johns Hopkins University.

After being subpoenaed in 1951 to testify at a closed-door hearing of the U.S. Senate’s Kefauver Committee on organized crime, Adams explained that he had retired from the numbers business earlier that year.  In 1951, he was indicted by a grand jury in Baltimore in a numbers conspiracy and was convicted. The Supreme Court overturned his conviction in 1954 on the basis that he had testified before the Senate committee under a grant of immunity and his testimony could not be used against him in any criminal court.

In 1969, the company became one of the first black-owned companies to trade publicly on Wall Street.  Adams bankrolled Super Pride supermarkets, which was headed by Charlie Burns, a cousin of Thurgood Marshall’s.  African American businessmen who turned to Mr. Adams for financial help had to agree to the condition that he would have a 51 percent stake in the business, no matter how small his personal investment.  Adams’ apparent Midas touch did not extend to everything in which he invested. He joined with his friend, boxing legend Joe Louis, in creating a soft drink, Joe Louis Punch. It failed miserably. When the Maryland State Lottery was established in 1973, Adams was hired as a consultant.

In the 1970s, Adams brought Theo C. Rodgers to Baltimore to work for Parks Sausage.  “When we sold the company in 1977, we formed A&R [Adams & Rodgers] Development Corp.,” said Rodgers. “Willie had a profound impact inside and outside of Baltimore. There isn’t a black-owned business in Baltimore that he didn’t finance.” In 1980, Adams was charged with operating a $5 million-a-year numbers operation. He was found not guilty in 1984 in Baltimore Circuit Court. Rodgers helped Adams and his wife establish the William L. and Victorine Q. Adams Foundation, which helps city students who want to attend college and study business.  Adams’ other philanthropic interests included the N.A.A.C.P., the United Negro College Fund, Liberty Medical Center, the YMCA, the Jewish National Fund and St. Francis Academy.  Adams and his wife, who died in 2006, lived for years in a house in Hanlon Park, near Lake Ashburton. For eight years, he had lived at Roland Park Place.

The cigar-chomping Adams enjoyed playing golf and went from being a numbers runner on the streets of Baltimore to the city’s first prominent African American venture capitalist, bankrolling numerous Black owned businesses such as Parks Sausage and Super Pride supermarkets, died on July 4, 2011 from pneumonia at Roland Park Place. He was 97 and had been in declining health in recent years.