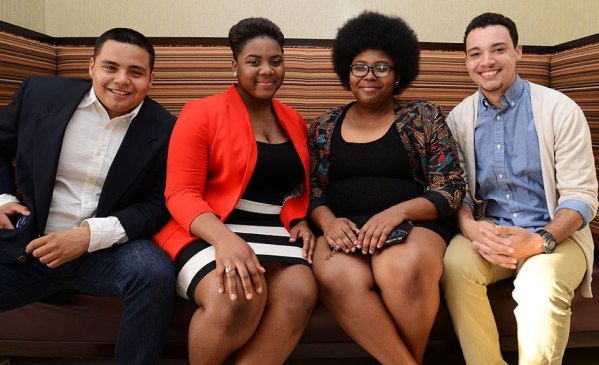 The Towson University Debate Team has a storied history of national success using an emphasis on racial and social justice. This was launched by a national championship in 2008 that helped to propel a historically elite, white activity into ongoing and rigorous conversations about the legacy of white supremacy in society. The most recent generation of Towson debaters have committed themselves to extending this legacy but have faced life altering challenges from the university itself.

Throughout the 2012-2013 academic year, Korey Johnson, Ameena Ruffin, Kevin Whitley and Lenny Herrera were all

confronted with inappropriate behavior that at times endangered their physical safety and security. They were confronted with this behavior by Stephen Davis who, at the time, was Director of Debate for Towson University. Among other violent acts, Stephen Davis engaged in sexual harassment, verbal abuse, and sometimes physical abuse. He even threw a tub (25 pound box) at one of the debaters (refer to the threat report filed with the university for all the incidents that occurred).

The students reported Davis’ behavior several times, but each time Davis’ wife and boss, Jennifer Potter, stood in the way of any solution. Rather than assist the students, Potter ignored the students concerns and sometimes threatened to revoke their scholarships or to kick them off the team for speaking out. When we heard of these incidents, members of Leaders of a Beautiful Struggle (LBS) attempted to become more involved (since many of us are alumni of the program). When we did so, however, we were told directly by Ms. Potter that the Communication Department Chair, Cynthia Cooper, said that “volunteers were not allowed to assist with the team”. When the students attempted to take their concerns to Ms. Cooper, they were told to take their concerns to Ms. Potter.

During the end of Summer 2013, the students began to take official steps to address the situation with the Provost’s Office. This action culminated in the removal of Stephen Davis from the debate team and a promise from the administration that they should not fear retaliation as a result of their bringing of formal charges against Davis.

One of the most troubling outcomes, however, has been that Jennifer Potter remains the Director of Forensics. This means that she still controls the debate careers of the students who effectively brought the charges that caused her husband to be fired. Ironically, students were told that there was substantially less money in the budget for the team this year. This means that they will not be able to go to all to the tournaments that are crucial to their competitive success. In the face of this, students showed the initiative, and fundraised money to go the Harvard’s national tournament, which is an extremely pivotal tournament of the year.

After the students raised the money to go to Harvard’s tournament, they were told by Jennifer Potter that “the coaches have always decided where students go and we’ve decided not to send students to Harvard”. There was no justification for no allowing students to go to such an important tournament that they had succeeded in raising the funds to attend. According to the students, Ms. Potter insinuated that their levying of charges against her husband is the reason why they were not going to Harvard.

It should never be acceptable for the safety, security and general well-being of the students to be compromised in an environment that professes to produce future leaders of the world. Towson University, a school that calls itself a “metropolitan university”, merely uses the mantra of “diversity” to perpetuate its facade. These students help Towson gain resources but the university has demonstrated no long-term focus on committing itself to ensuring that these students actually have good experiences.

It leads us to wonder if the debaters (who are all students of color) would have been treated this way if they were white. Not only that, but the university’s response to this issue has been insulting, negligent and inappropriate. The highest levels of the university (including the President, Provost and Dean of Fine Arts and Communication) have been informed and have largely done nothing substantive to assist the students.

The university has shown a complete disregard for the level of competitive success that they’ve had. In Towson’s recent Alumni magazine, they fail to even mention any of the past debaters by name who trail blazed the success of the team. The only conclusion we can draw is that their lack of commitment to the team is based in the institution’s racist attitude. In LBS, several of us are alumni of the program and the university has never reached out to us to support the team, which leads us to further believe that the university harbors racist attitudes towards the program.

These debaters are in constant fear of retaliation and are unclear of their debate careers at Towson. In light of these issues, we stand in solidarity with the current debaters at Towson, and offer the following demands on their behalf:

UPDATE: The Towson Debate team was given permission by the Towson administration where they did exceptionally well. Both teams concluded the tournament with respectable 5-3 records.

UPDATE: LBS is actively working with the Towson University administration to ensure the safety and well being of the students.