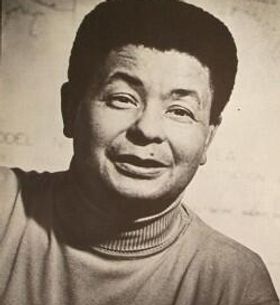 Chairman of the local chapter of Congress of Racial Equality (CORE)

Organized 1960 Freedom Rides to the Eastern Shore of Maryland

Helped in the desegregation of Gwynn Oak Park

Walter Percival Carter (1923-1971) was a civil rights activist and a central figure in Baltimore’s civil rights movement, organizing demonstrations against discrimination throughout Maryland. A hospital, an elementary school, a recreation center, a college library and a day-care center in Baltimore are named for him.

Carter was the seventh of nine children born to Carrie P. and Walter Carter Sr. in Monroe, North Carolina.He received his bachelor’s degree from North Carolina A&T, where he participated in voter registration, the debate team, and was a member of the Progressive Party. He was well liked by his classmates, and admired for his keen intellect and unusual sense of humor. Carter obtained a Master’s Degree in Social Work (MSW) at Howard University. While studying at Howard, he met young Stokely Carmichael and the two became friends.

Carter led voter registration drives in the South, was a World War II veteran. As chairman of the local chapter of Congress of Racial Equality (CORE), he was an organizer massive and aggressive campaigns, including the 1960 Freedom Rides to the Eastern Shore of Maryland, Gwynn Oak Park, Howard Johnson Chain, and other eating establishments along Routes 40, 1, 150, and 50; apartment buildings, hotels, and other public accommodations throughout Maryland. Maryland coordinator of the March on Washington in 1963. He was a coordinator of the massive Federated Civil Rights Organization march, of more than 3,000, to protest segregation in housing in 1965.

In 1966, he and five other CORE members formed Activists for Fair Housing, later shortened to Activists, Inc. That year, the Apartment House Owners Association of Maryland was forced to open facilities to all. In the late 1960s, Carter convinced the Community Chest, now known as the United Way of Central Maryland, to fund grass roots organizations with African American constituents, such as Echo House. Carter protested segregated housing and poor living conditions that African Americans faced in Baltimore in the late 1950s and through the 1960s. He organized protest marches, often taking the fight to the homes of the whites who owned the segregated housing.

Carter was appointed by mayor Thomas L. J. D’Alesandro III, to head the Community Action Agency (CAA). But the Baltimore City Council voted 10-8 on September 30 to not confirm Carter’s appointment. According to news accounts, William Donald Schaefer complained that Carter was “too radical”, and would move the agency forward at a pace at which the city was not yet ready. Due to Carter’s rejection, 12 of 21 members of the Community Action Committee, three top members of the Urban Coalition including Parren J. Mitchell resigned from their positions in demonstration of protest to the rejection of the nomination of Walter Carter.

In 1963, Carter created the William L. Moore Foundation, for fellow CORE activist and Baltimorean William L. Moore. Moore was marching to the mansion of the Alabama state Governor to deliver a letter. While embarking on this lone march on April 23, 1963, in Gadsden, Alabama, Moore was shot in the head twice and later found by a motorist passing by. The letter that Moore intending on giving to the Governor was later found and never delivered to the Governor of Alabama.

Carter died on July 31, 1971, as he was giving a report to the Black United Front, at Rev. Vernon Dobson’s Union Baptist Church in Baltimore. He is survived by his wife, Zerita “Joy” Richardson Carter, a native-Baltimorean, and retired public school teacher. She continues to reside at the family home in Ashburton. Carter’s younger daughter, Jill Priscilla Carter, is an attorney and member of the Maryland House of Delegates. Carter’s elder daughter, Judith Lynn, is married to Baltimore City circuit court judge Sylvester B. Cox

In 2012, Carter was the subject of a documentary film produced by the University of Maryland School of Psychiatry called: Walter P. Carter:Champion for Change. In the film, Carter is referred to as the “Martin Luther King of Maryland”.