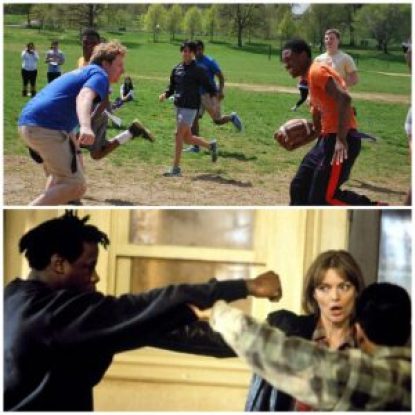 Thread is White Supremacy, With a Smile

On July 26, 2018, the New York Times published a piece written by David Brooks entitled “Where American Renewal Begins.”  In this piece, he asserts that “social fragmentation and social isolation are fundamental problems afflicting America today.”  He positions a youth program in Baltimore, called Thread, as a model for uplifting people in places like Baltimore. His column identifies a fundamental point of contention between mainstream white American political and social ideas and those of us committed to Black Liberation.  The fundamental problem that afflicts America is the fact that it is structured on the system of white supremacy and the other forms of power and oppression from which it organizes.  Attempting to integrate Black people into a society that is culturally, economically and politically committed to white supremacy will (and has) done more harm than good to Black people.

Thread is a program that was founded by a white woman named Sarah Hemminger from Indiana who happened to be a Ph.D. student studying biomedical engineering at Johns Hopkins University.  She developed a program that was based on her own experiences with social isolation. As a young person she experienced feelings of alienation from her community. Her community shunned her family because her father discovered that their pastor had been “dipping into church funds.” Her community decided to punish her family for her father pointing out the unethical behavior of their pastor instead of holding the pastor accountable. While this is a terrible thing to happen to a family, this does not equate to having any meaningful knowledge about what it takes to have a transformative impact on the lives Black youth and their communities in Baltimore.

Her model approach to youth development, which led to the creation of Thread, wasn’t based on any rigorous study of the majority Black community that she was working in. Nor is it grounded in the work of Black led organizations who were already doing impactful work in Baltimore with young people.  She merely had an idea that she wanted to implement in Baltimore; subsequently, she has been able to lead an organization that is well-known enough to have a New York Times article written about it.

The Dangers of “Compassion”

Liberal White people (and the Black people who work in and support their institutions) consistently make the mistake of believing that their compassion is a positive force for improving the quality of life of Black youth.  Usually at the core of their compassion is a racist paternalism and opportunism, often covered with a smile.  It is as if white people believe that they and their institutions are magical, and that by merely being around Black youth living in poverty, and by simply caring about them that this qualifies them as a force for good.

If we look at the state of education of Black children over the last 50 years, we can see that white institution’s intervention into dealing with issues facing Black children has had an overwhelmingly negative impact on Black Children.  In 1998 Dr. Asa G. Hillard III in his book “SBA: The Reawakening of the African Mind” describes many of the negative impacts that have come from a post Brown vs Board society where white institutions dominate the education reform and youth development arena.  These negative impacts include excessive school discipline, an increase in Black children described as mentally challenged, more teachers that are disconnected from the communities that their students come from, and the proliferation of ideas of the inherent pathology of Black youth.  What is even worse is the billions of dollars that are given to white institutions to research, develop and operate programs for Black youth that have created an industry based on one’s ability to capitulate to the narrative of Black pathology.

White institutions in the non-profit sector profiteer off of the suffering of Black people by the use of suffering Black people as thought experiments and meal tickets for organizations that claim to serve our community.  The white supremacist idea that Black people are primarily a suffering and pathological people is baked into the collective American consciousness.  This facilitates a dynamic where white people can operate and control institutions that primarily serve Black people in the name of wanting to help us, and make a living doing it.

I want to be clear that I am not casting dispersion on Black people that have worked for this organization as a mentor to young people. I think it is helpful for Black youth to connect with functional and self sufficent Black adults. It would make more sense for the resources that are invested into Thread to be invested in programs that are run and operated by Black people with a track record in youth development.

The problem is that regardless of how well intentioned the volunteers as mentors at Thread are, they are still operating under framework that sees integration as a solution to the problems facing young Black people and that promixity to white people is a magical elixir that leads to empowerment. They say in their philosophy that “Thread believes that, by cultivating relationships that transcend racial and socioeconomic barriers – and by creatively building unconventional families and communities not defined by DNA and addresses – we can overcome the poverty of isolation and, in its place, establish a wealth of human connection permanently linked by unconditional love and support.” This is a veiled way to say that they bwant Black kids to build familial relationships with white (and other non Black) people.

What ends up happening is that there are a handful of Black Youth that will benefit from programs like Thread, but it will ultimately benefit the employees and leadership of the organization more than it benefits the youth.  Some people will be able to use their work/volunteer experience at a program like Thread and leverage it for professional opportunities that are far and above anything that many of the youth that they are serving even realize.  The awards and social capital that come from leading an organization that serves Black youth is tremendous. When we look at institutions like Johns Hopkins school of Education, or their school of public health we see that there are people whose livelihood and professional accolades are predicated on their designation as interpreters of Black pathology.  The countless studies that investigate the many dimensions of Black oppression provide opportunities for those who produce these studies as people who can render Black pathology and oppression in an intellectually digestable manner to the white liberal, corporate mainstream.

Mining our Past: Building Threads to Black Culture

The harm done is that Black youth are disconnected from the traditions and cultural resources that reside in their communities.  They are socialized to see their own community as merely a source of pathology and to see success as a quest to be more like white people or the Black people that are acceptable to white institutions.  I have seen this first hand in Baltimore where Black youth have experiences with white people who will feed and house them in the absense of their parent’s ability to do that. Then youth will internalize the notion that their parents and the communities that their parents come are just mired in pathology, without understanding the social and economic context that impacts their community. Black Youth see opportunities and compassion coming from white people and Black people that are acceptable to white people and this further pathologizes the community that is usually being served by the non-profit sector.

Anyone who is serious about addressing the issues that exist in the Black community will take a very different approach than what Thread and David Brooks have espoused.  There are Black organizations and individuals who have been studying and doing work in our community for years.  There are programs, and bodies of work, that are often ignored by the white mainstream due to the white supremacist impulse that Black people’s programs are inferior to the ones that well-meaning white people can produce.  Programs in Baltimore like Wombworks, which is a program that “brings together art and spirit through traditional art forms and showcases socially relevant productions that empower performers and youth in social change issues” is representative of the kinds of work that harness the inherent genius in our community.

This is in contrast to the approach embodied by Thread which consists of developing a community of support around young people that are for the most part completely unaware of the bodies of work and cultural resources that reside in the community.  Wombworks was founded by three women – Mama Kay Lawal-Muhammad, Mama Nata’aska Hasan Humminbird, and Mama Rashida Foreman-Bey – who are immersed in the community and have committed their lives to empowering youth in Baltimore.  They understand that when Black youth have a strong knowledge and love for themselves and their community that they develop the capacity to do more than just be successful individuals, but they become a transformational force in their communities.

If people like Sarah Hemminger and David Brooks want to really help improve the quality of life of Black youth they should do what they can to provide resources to organizations like Wombworks.  Otherwise, they will be doing more harm than good.