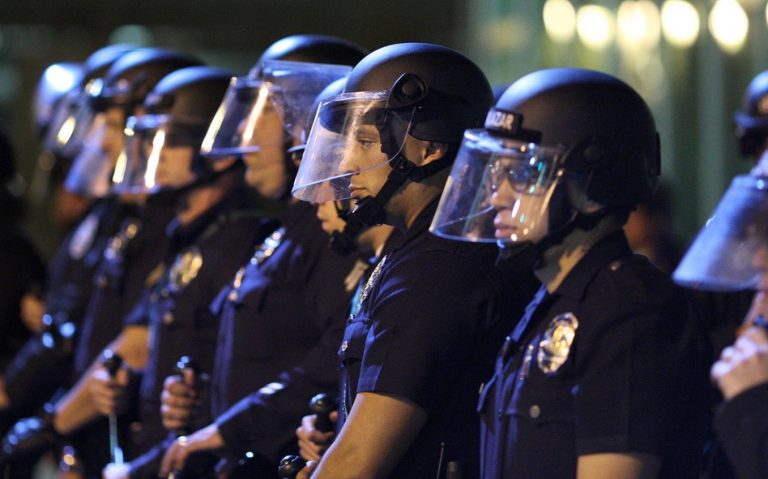 An Open Letter to the Maryland Fraternal Order of Police

My father said he survived two wars; one in Vietnam, the other on the streets of Baltimore.

My father, Larry Grandpre, was a narcotics officer for over 20 years in the Baltimore Police Department while my mother, Nadine Stokes-Bailey, is a former State Trooper. My parents raised me to understand the context of discipline and the ethic of service that exemplified the best of public service.

I’ve seen both sides of the so-called “thin blue line.” When my 1st grade teacher asked me what I wanted to be when I grew up, I said “police officers.” Many youth want to follow in their fathers’ footsteps. But for me, it was more than that. I was quite literally raised around cops; I can remember waiting for my father in the eastern district office, and I can almost still hear the hum of the vending machines my brother and I watched hungrily as we anticipated my father’s safe return. I admit that I took it a bit for granted as a child; my father would come home safe. Only later would we hear of the fights, injuries, concussions, and even shootings he endured on his job.

As an adult, I have chosen to apply my childhood lessons by heeding the call to serve the community in my own way. I have worked with a local youth leadership development and political advocacy organization called Leaders of a Beautiful Struggle for the past 5 years. I have joined my fellow members in using debate as tool to advance social justice. After the incidents involving Mike Brown, Trayvon Martin, Aiyana Jones, Tyrone West, and other Black people gunned down by cops, I have had to looking into the often teary eyes of the students I have worked with, listening to them ask “why did this happen?” and “how can we stop this?” These questions have forced me to face my inability to answer the students. They have revealed a lifetime of depending on and looking up to individual cops as a mockery of my debate skills. They have left me scrambling to understand the institutional nature and culture of policing in America.

It is within this frame (not of blaming individual cops or even specifically the city of Baltimore, but coming to an objective analysis of the deep seeded issues with the institutional nature of policing in America), that I have become an advocate for reform of Maryland’s policing procedures. The necessary advocacy work includes calling for changes to legislation regarding specific rights of the police to internally investigate accusations of police malpractice: the so-called “Law Enforcement Officers Bill of Rights.”

It is a decision I did not come to lightly; I was raised with the belief, one I still in my heart of hearts hold, that every death of police officer is a “death in the family.” But as I have grown up, I realized that Trayvon, Aiyana, and Mike are ALSO part of my family. Yet, there is one side of the “family” with vastly more money, lawyers, public relations power, and advocacy to protect their rights, while another part of my family was left with less protection.

Calling for police reform is NOT anti-cop. If it were, I would not participate. It is calling for a balance of legal and internal due process to ensure that police power, especially the ultimate power police have imbued upon them by the state in the power to take life, is used responsibly. When it isn’t, there must be a fair, balanced procedure to inquire about these actions and give justice to afflicted families.

The “cop’s son” in me wants to give the current process the benefit of the doubt, but the debate coach in me won’t allow that. Through analyzing the overwhelming bank of empirical data, personal testimony, police admissions, and sheer common sense logic, it has become clear to me and fellow policing reform advocates that the status quo does not represent justice. How can police be accountable when there are only law enforcement officers on internal trial boards, police get 10 days before being compelled to make a statement to internal investigators, and all complaints outside of a 90 day window or not made specifically by the accuser (who may be traumatized, hospitalized, intimidated, or, unfortunately, deceased) are thrown out, be a just process?

I can accept that the process of reform is difficult. Given my upbringing, I can further understand police officers, who take such great risks in the job, feeling under attack. I could even understand that the proposed reforms may need to be amended.

What I can’t accept, as a citizen, as a debate coach, and as the son of 2 police officers, is that police departments would be unwilling to even meaningfully engage the community in a legitimate discussion on reforms. We have high ranking members of the FOP on the record saying they are willing to meet with the community, yet even with a room in Annapolis booked, several members from the coalitions of advocates assembled, and a stated commitment on our part to eschew politicians and media cameras, we have still not be able to get a meeting with the Fraternal Order of Police, or even a response to our requests.

One thing that a debate coach, a community police reform advocate, and the son of cop have in common is they all breed a respect for people, a valuing of genuine dialogue and honesty, and an understanding that reciprocity and engagement are critical to engagement, even if you disagree with them or are in a tense situation. Unfortunately, as of now I cannot say that the Maryland Fraternal Order of Police is exemplifying these traits. I was very disappointed to see the Fraternal Order of Police advocating their supports reject any/all changes to law enforcement officers’ bill of rights without even an explanation of what these specific changes entail or why they might be dangerous. This is the sort of “do nothing…or else” argument which chills the spines of lawmakers and freezes out opportunities for rational discussion and dialogue.

I fear this shows the opposition to reform is less concerned about the specifics of the legislation, which call for common-sense changes (such as extending the complaint reporting window, allowing at least some non-law enforcement officers to potentially engage the internal process, and modifying the so-called “10 day rule”), and their impact on police officers, and is more concerned with the psychology of the “thin blue line.” If so, then the opposition to reform would hold that the few cops (a “line of blue”) are all that separate civilization from chaos, with reform advocates framed as part of this “chaos.”

Having experienced both sides of this thin blue line, I do not think dialogue will solve all of these issues. Many people have had terrible engagements with the police and thus see them as a contemporary legacy of institutional racism bent on ignoring calls of justice and demonizing reform advocates. As the son of cop, I would love to hear these arguments proven wrong. Heck, I would love to have a chance to have these voices proven wrong! As long as there is a refusal to speak across the “thin blue line” that I straddle daily, I fear we will be stuck in the current dynamics of reformers calling for change only to be stereotyped as “anti-police” and ignored. The dangerous cycle will continue, and chants on the street demanding justice for Black lives will be met with deafening, and as the son of 2 law enforcement officers, saddening, silence.

And I fear more days to come where those seen as threatening the “thin blue line” are sooner lined in chalk then genuinely engaged.