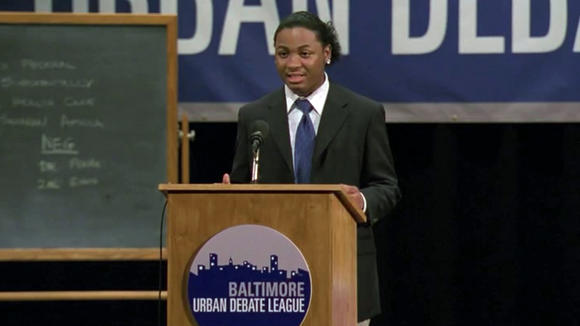 Smile for the Camera: The Representational Limits of ‘The Wire’

Namond Brice, son of the infamous Barksdale hitter Wee-Bey Brice, is competing in a debate. The former corner boy now wears formal attire on stage hovering above three judges, all listening attentively to his impassioned pleas. His adopted father, former BPD major and certified member of the show’s exclusive clubs of “good Po-lease,” Howard “Bunny” Colvin, sits with his family in the crowd, his look of paternal concern confirming for the largely white, liberal audience what it wants to believe, what it needs to believe: Namond, the corner boy with the heart of gold, has been officially saved.
As someone intimately involved with the machinations of the local debate league here, this scene has always stood out in my mind. I understand why this narrative would make sense to David Simon; disaffected youth finds solace in a community where he literally “finds” his voice and can engage in the sort of dialogue and mutual sharing of ideas so often missing on “the corner.” The complex and nuanced reality of Black life in Baltimore is omitted in the bleak, European tragedy narrative “The Wire” is locked into. And with so many people theorizing about how to “save” Baltimore now, it seems important for there to be a deconstruction of “The Wire’s” problematic tacit political assumptions on race.

“The Wire” is a fine piece of art—it truly stands alone in American television—but as a political text, it reflects the problems in much of leftist American political discourse, with old-hat union politics and white liberalism being the only life rafts thrown to the audience in a sea of pessimism. The disjunction between the portrayal of Namond being saved by debate and an analysis of how debate actually works in Baltimore is just the clearest example of the problem with this.

Debate does save lives in Baltimore, but not the style of debate Simon portrays on “The Wire.” Namond reads a prepared speech about the ravages of AIDS in Africa, calling for Africans to be saved by foreign aid the way he, in theory, has been saved by this nonprofit organization. In his style and content, whiteness and respectability are grafted onto his Black body, and in this context, his moment of being “saved” takes on a much more nefarious quality. In reality, dressing in suits and talking about foreign policy have not appealed to youth on the corner, at least not until rogue bands of Black debaters began bucking debate-community convention and explicitly focusing on racism/white supremacy, using abrasive, confrontational hip-hop styles. The rogue debaters have ruffled the feathers of the liberal “nonprofit professionals” who control urban debate leagues around the country, but have helped produce a decade of Black policy debate champions with the agency and training to take on the unique challenges of being Black in America. This includes the current and former debaters who helped to lead a key protest in Baltimore in the aftermath of Monday, April 27’s violence.

The people who advised Simon on his debate scenes represent the standard-bearers in the traditional world of debate. If they had their way, Namond would have been “saved” in the traditional sense of getting access to vestiges of institutional privilege, but would never have gotten the training he needed to help play his role in “saving” this city in the midst of turmoil and uncertainty. To Simon, the Namonds of the world may be skilled in holding another banal public forum, but they lack the connection to grassroots activism and the historical context to choose to take to the streets and take their place as leaders of a growing social movement. This is not to accuse Simon of anything nefarious, but he was shooting a show in the middle of the debate community’s civil war, and he chose the wrong side of it, which can be chalked up to the unknown unknowns inherent in white liberal attempts to engage Black suffering, which is an inherent problem “The Wire.”

“The Wire” packages Black suffering so that it is digestible to a white public, a 101 course on urban decay. But the ground it makes up in appealing to HBO’s white professional demographic, it loses in its inability to focus on everyday Black people surviving and thriving in the face of the “tragic” conditions Simon and company thrust upon them. The closest the show gets to presenting an autonomous Black solution to Black problems is Cutty’s boxing gym, and the fate of the young people who cycle through there frame the effort largely as a failure. This is in stark comparison to the portrayals of the ill-fated efforts of Frank Sobotka, who despite engaging in criminal activity is seen as the fulcrum in interracial solidarity and is self-sacrificing for allocating smuggling money to a political campaign to increase jobs at the port. The limitations of this labor activism is framed by the most problematic bit of language in the show’s five seasons, which is not anything Bird says to Kima in an interrogation chamber, but when Sobotka in effect says to Nat, a black colleague, that, without the extra jobs dredging would bring, “we’re all niggers.”

In a country that simply refuses to grapple with the reality of its legacy of slavery (the show fails to mention slavery in any serious way in five seasons), or the distinction between white poverty and black poverty, to uncritically collapse the centuries of black suffering in Baltimore to essentially the same as that of an unemployed white person shows the fundamental inability to grasp the reality of anti-Black racism in Baltimore. In fact, whether it be the tacit framing of Black union folks as “irrational” in wanting to have black leadership of the union, or portraying the citizens of Baltimore falling for Mayor Royce’s transparent race-baiting tactics (including dressing in Kente cloth to make himself appear more authentically Black), the show most vaunted by the white liberal academy for its engagement with race seems to believe there is no legitimate way in which racism can be presented in political contexts, unless you’re a well-dressed former corner boy at a debate tournament calling for more white saviors to be sent to Africa.

Maybe this is why over its five seasons there is hardly a whiff of a “Black Lives Matter”-type movement in response to conditions in Baltimore, for that would require: (a) a realistic portrayal of police brutality, which the show largely avoids in deference to its “good Po-lease” mythology; and (b) a show runner that would embrace the belief—which their vestigial Marxism and white liberalism both stand in contrast to—that Black people have the power to come up with their own solutions and ultimately save themselves.

Filling those requirements, however, would lack the satisfying catharsis of seeing Namond in his suit giving a speech. Perhaps it’s time for our vision of race to reach beyond relatively antiseptic and Twitter-friendly pop-culture analysis and actually get to the depth of issues around race in America, for despite how challenging this is, after the credits roll, we’re all brought back to the real Baltimore. The insight we find when we consider real Baltimore will actually determine whether our future is a re-run of the same false promises and neo-liberal decay of the past 30 years, or if through investing in grassroots, indigenous institutions, Baltimore has even the slightest chance at the happy ending “The Wire” consistently denies us.