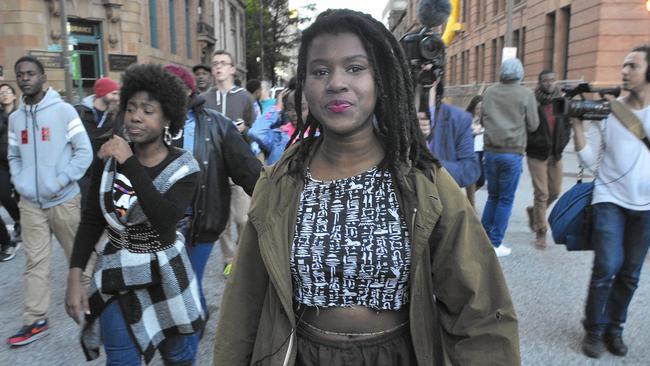 I am extremely troubled with the nature of the media coverage of the demonstrations at Baltimore City Hall over the past week.  The representational troupe of angry Black kids just making noise is a cheap and easy mechanism used to dismiss the legitimate demands that were made.  It is the media’s responsibility to further investigate the substantive demands made by groups that decide to demonstrate.  Instead, most of the coverage has been focused on the sensationalized spectacle of demonstrations.  It seems as if many of those who are talking about and covering the demonstrations can’t even imagine that young Black folk actually have meaningful goals.

What also has not been reported is that there was a meeting with the Police Commissioner on Sunday October 18th at 5pm where he agreed to publicly commit to the principles in our demands.  Many of the young people were pleased with the meeting.  But when the Commissioner went back on his word and did not follow through with what he agreed to, this angered everyone involved in the effort.  I am asking that the media confront the Commissioner and ask him if this is true.  If he is willing to go back on his word with folks who he says he wants to build a relationship with then what does that say about how he will conduct his duty as Chief of Police?  My challenge to mainstream media is that you need to report on the nature of the demands of the demonstrators.  Any other kind of reporting would be negligent and you will be called out.

I want to also publicly acknowledge that there are many elders in Baltimore who have made this movement possible.  Elders who have poured into me, and trained me and others to be all that we are.  Elders who have tirelessly committed to the liberation of Black people from the system of white supremacy that is operationalized by many of the real material institutions that govern our lives here in Baltimore.  I want to say thank you for the contributions that made the demonstrations at City Hall possible.  There are too many of you to name, but this is a movement that respects the wisdom and contributions of our elders.

What saddens me is that there are people in our community who are more concerned about their individual status with white controlled and dominated institutions than actually changing the conditions that Black people face.  These folks are more concerned with being ‘respectable negroes’ who have favor in mainstream institutions instead of taking bold stances on fixing our problems.  I won’t call out names in this piece because that would take up a lot of time and this piece was not intended for that. However in the coming days if you are one of those people, we will call you out.  Appeals to process and order that I have heard since yesterday’s demonstrations are veiled ways to justify complicity with the status quo.  I am talking primarily about people who pose as elders, but are really most interested in maintaining their position.

One conversation that keeps coming up parallel to the conversations about the demonstrations are the homicides in Baltimore.  Two responses to that. 1) The demand around investing in grassroots educational programs is a crime fighting measure.  Young people often are left with nothing meaningful to do.  Often white controlled and dominated institutions are given money and credibility to fix problems that they are not capable or qualified to fix.  We are the only ones that can fix our problems.  Police are not going to solve our crime problem, the community has to.  The purpose of the demand around investing in grassroots organizations is that our city needs to invest directly in those of us in our communities who are engaging with youth.  2) If you are genuinely sincere about stopping violence then raise money for organizations that do violence prevention work.  Safe Streets has been doing work for years around addressing community violence.  Raise money for them.  Kimberly Armstrong, who has been working on community violence issues for years, needs to be invested in.  There are many others that could be named that address community violence.  If you are serious about addressing community violence, support investments in them.  Otherwise, your commentary, in my estimation, is empty moralizing and a waste of everyone’s time.

Again, here are the demands. Report on them and investigate the legitimacy of these demands so that the general public can make an informed decision about whether they support the demonstrations or not.

1) Commissioner Davis should agree to the terms of engagement for protesters.  Here is a link to the terms that were presented to the Commissioner.  These demands were put forward in response to the comment that he made back in September when he said that he would treat “protest like protest and a riot like a riot.”  This seemed like a veiled threat to protesters, so this is an attempt to publicly hold the Police Commissioner accountable to ensuring the safety and rights of protesters.

2) Fire Paul Graziano.  Given the allegations of sexual harassment by the maintenance workers toward women in Gilmor Homes, the recent issues at Lakeview Towers around the lack of water and heat, and the general trend of gentrification that has happened under Graziano we demand that he be fired.

3) A $20 million investment in grassroots organizations that work with educating youth.  If we are interested in changing the structural violence directed at Black people, and the community violence that is perpetrated against one another we need to invest in people of and from our communities who can address our problem.  We cannot rely on government agencies to fix our problems. We must be given the capacity to address our own issues.