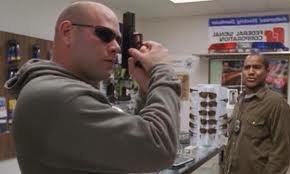 The Pitfalls of The Wire’s Depictions of police Violence

Note: This piece is designed for people who at least have a functional understanding of The Wire (i.e. have watched all 5 season). Also, the piece contains (mild) spoilers. The goal is to question the representations of The Wire from the perspective of someone who was actually raised in Black Baltimore.

The Wire very intentionally attempts to position itself outside of the American tradition of police dramas. Employing HBO’s free subscriber-based model (and the subsequent freedom from corporate sponsors), The Wire attempts to complicate, if not eschew, the notion of police as the unambiguous “good guys” taking down the forces of evil that continues to dominate network TV cop dramas. As such, the show attempts to mirror the real life multiplicity of cops; fictional depictions of police violence go beyond what viewers typically see on screen. While the show’s depictions of police violence are advanced, the liberal and Marxist foundations of The Wire too often prevent the racialized reality of police violence from becoming evident. The show seeks intellectual resolution for its educated, white audience over integrating power relations that locate the police force as an institution— good intentions of individual police aside— as a critical force for perpetuating structural racism and white supremacy.

In the Baltimore of The Wire, police bias is an aberration; an individualized moment where cops can fall from grace and fail to attain the vaunted label of “good Po-lease” by succumbing to their own egos, the pressures of a system driven by statistics and political posturing, or, at times, their own personal biases. The show’s two most prominent instances of police violence fit into this template. When police detectives “Hurc,” Prezboluski, and Carver, drink to do “field interviews” in Season 1, they are framed as victims of institutional obsession with statistics. They are trained to “take bodies” in order to up arrest rates and thus develop into the soldiers of a failed drug war.

The subsequent assault of a young black youth by the white officer Prezboluski, which cost the youth his eye, is portrayed as a moment of drunken bravado. The incident precipitates angry responses from the residents of the Baltimore apartment complex, throwing bottles and even a television at the cop below, which incites gunfire from the fearful, inebriated police officers. From the perspective on an academic, many interesting things are being portrayed here: the subtle sense of white privilege Prezboluski and Herc show, how Carver reluctantly acquiesces to their calls to go into the Black Baltimore and “let them know we’re here,” the dynamic of power and resistance between the cops and the citizens, and the nature of institutional accountability after their supervisor, the Black police lieutenant Daniels, instructs his officers on the usage of technical language to avoid consequences for their actions. But as a citizen of Baltimore I am overwhelmed by the sense of complete inadequacy. There is the portrayal of wanted, drunken, anti-black police violence, the inability to discuss the disproportionate police force used by the cops, and the bulleted response to beer bottles after violently instigating a conflict with innocent citizens (one of whom is made to remove his pants during a search). Furthermore, the ridiculousness of the dramatized moment where the people in the apartment return fire at the police is so unlikely as to be inconceivable given the widespread understanding of the consequences of even touching an officer, yet alone shooting at one.

In the Baltimore of The Wire, police bias is an aberration; an individualized moment where cops can fall from grace and fail to attain the vaunted label of “good Po-lease”

The complete lack of accountability allows a white officer who commits a violent act on a black youth to be unpunished. Yet, the show has no time to flesh out any of these dynamics, despite its vaunted “slow, meandering” style, as the plight of Black “civilians” (Black Baltimore’s not in the drug trade or part of the police force) is sublimated in the name of advancing the narrative battle between the cops and the dealers. The show’s so-called intellectual complexity and boasted moral ambiguity fail to provide a space for a stance against systematic police violence that would be necessary for the show to actually meet some of the social justice goals that the creators, David Simon and Ed Burns, set out to meet. The show limits its notions of justice to macro-level Marxist-inspired intuitional analysis and liberal individualism. The individuals in this instance are essentially “vindicated” throughout the next 5 Seasons; Hurc eventually becomes a successful private investigator who eventually helps the police crack a big case, Prez becomes a loving and compassionate teacher, and Carver evolves into an effective investigator who exemplifies “good Po-lease” by learning about the personal lives of the “hopers” in his district as well as caring for Randy, a youth targeted after being labeled a “snitch” for talking to the police. Nowhere is the societal pressure behind the obsession with crime statistics interrogated, nor the reality of the racialization of the War on Drugs assessed, and neither still the deep American desire to see law enforcement as state-sanctioned control of the Black Body interrogated. This would violate the deeply rooted white liberalism and Marxist tendencies which demand a colorblind, class-centered analysis of the problem. Indeed, the reality of Baltimore policing shows the ubiquity of racial bias in the shooting of unarmed black men by local cops which, despite the show’s claims of “gritty” realism, never appear once in the 5 seasons of The Wire.

The questions of subconscious bias are subsumed by the shows liberal individualism in ways that make the show palatable to a largely white liberal audience, but ultimately obscure the racialized reality of policing. Prez’s shooting of a Black cop is the closest the show comes to broaching the subject of subconscious bias, but Prez’s subsequent relationship with black students (as well as his narrative portrayal as a “goof”) absolve him from a substantial amount of assumed bias. Moreover, his recognition of the possibility of racial bias fits within the show’s white liberal narrative; to simply see a character acknowledge that they could have subconscious racial bias is counted as a win within the liberal sensibilities of the audience, forestalling any substantive social justice question about the larger system of police tactics in this individualized moment. Similarly, the Season 5 portrayal of the white cop Colicciho dragging a black teacher out of his car is portrayed as a rogue police officer.

The audience is instructed to praise the courage of Carver for being willing to report him and not follow standard operating procedure of instructing his subordinate how to “write” the incident (using technical language and favorable narration of the facts help to absolve the officer of institutional or legal reprisal, as Daniels does in Season 1 with his officers). Again, police violence is shown as a personal failing, the solution to which is not to question the nature of hyper-policing, the lack of community control, and the cultural relationship of white cops in a predominantly Black city, but more “good Po-lease” with the strength and fortitude to stand up to the pressures within a corrupt system in the name of truth and justice.

There is a consistent theme with The Wire. The show’s so-called realism really stems from it producing a vision of Baltimore that represents what the audience thinks Baltimore is like, not what it is actually like. The reality is in a city like Baltimore, whose political dynamics demand performances of control over Black bodies to assuage the deep seated racial fears of a white electorate, too often “crack heads, taken bodies” is not an aberration; the personal failing and affront to the notion of “good Po-lease” is its very definition. The show attempts to portray a heroic deputy commissioner Daniels refusing political pressure from the (White) mayor Tommy Carcetti to “juke the stats,” or fudge numbers as to falsely improve crime statistics. In reality, the political moment of The Wire’s last season coincided with Martin O’Malley, the Baltimore mayor then Maryland governor on whom Carcetti is loosely based on, precipitating a rash of mass arrests of predominantly Black men in Baltimore in order to “juke the stats” and help him in his eventually successful gubernatorial run.

That The Wire fails to present this reality is an affront to its so called “realism” and furthers the notions that “civilians” don’t matter in the representational world of The Wire; too often those who are “jacked up” by police are portrayed as guilty. Even as The Wire has mixed messages about drug prohibition and tries to humanize the Baltimore’s drug users, the reality of the utter capricious nature of police harassment is obscured behind The Wire’s inability (despite its desire to shake the legacy of the traditional cop drama) of its “good Po-lease” mythology. In reality, the mass arrests of 2007 lead to untold numbers of innocent men receiving violent contact with the police, the trauma of which The Wire simply refuses to acknowledge. To inhabit a body perpetually open to police search, to be violated by those given state authority to deem you as a threat, to be physically molested with searches, and to even be killed with essential impunity (the show’s own logical reveals how easy it is for cops to get away with violence) produces a relationship to the world that the show, with its white liberalism and Marxism, simply cannot accommodate or represent. Perhaps this is why nowhere in the show does public resistance to policing even become part of the plot; like a good Marxist, Simon views the “citizens” of Baltimore as simply cogs in the machine of capital, not autonomous, cultural grounded subjects with the ability to theorize outside of the intuitions (the school, the union, the police) which for Simon essential brings Black folk worth representing. It is no surprise thus that nothing akin to the #BlackLivesMatter movement is seen in The Wire; it operates outside the ideological framework of the show’s framing, vibrating “on the lower frequencies” of Black social institutions that operate outside the show’s conceptions of resistance.