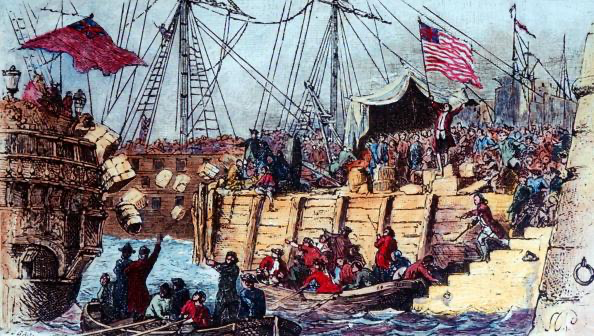 When Rioting Is the Answer

America was founded on riots. From as far back as the days of tar-and-feathering British tax collectors, citizens have resisted power by fighting back, using fists when their voices weren’t heard.

This violent tradition lives on in the country, boiling up at times in our cities. In places like Los Angeles in 1992, and Ferguson and Baltimore in the past year, urban tensions—often the result of racial and economic inequalities—have exploded into a mess of arson, looting, and police brutality.

What sort of progress is made in these periods of unrest? Do they actually make conditions better? In advance of the Zócalo/UCLA event “Can Urban Riots Cause Change?” we asked people who study, write about, and are deeply engaged with sometimes-violent protests: Have urban riots ever improved the lives of a city’s residents? If so, when and how? If not, why not and what happened?

From the Boston Tea Party to the Los Angeles riots to the unrest in Ferguson, Missouri, violent resistance has sometimes led to positive social change. Most often, rioting has drawn attention to oppressive authoritarian rule (sometimes by kings, sometimes by police). In some cases, it has also spurred investigations into law enforcement or other government systems. Occasionally, it has even forced corrupt or incompetent leaders to surrender or resign.

But rioting—or other violent resistance—does not always make people’s lives better. The 2005 French riots surrounding Paris led to deaths, injuries, car burnings, and arrests. The aftermath was a crackdown on immigration and blaming of musicians instead of a frank assessment of ethnic and religious tensions.

Nonviolent resistance is a relatively new path to social justice. Gandhi and Martin Luther King, Jr., were some of the first to convince large groups of people to protest without physical fighting. Gandhi accomplished something that the early Americans did not; he got rid of British colonial rule through peace, not war.

Riots are not great solutions, but riots are usually caused by real injustices. Thousands of people do not take to the streets for no good reason. That was true during the American Revolution, and it is true today. Riots are often the desperate response of people who feel they have no other recourse. We can reduce rioting by providing better access to justice for everyone.

Sherry Hamby is editor of the journal Psychology of Violence and director of the Appalachian Center for Resilience Research. Her most recent books are Battered Women’s Protective Strategies: Stronger Than You Know and The Web of Violence.

Lawrence Grandpre — Their value depends upon whom you ask

If one had asked the white residents of Tulsa, Oklahoma, in 1921 whether urban riots improve the lives of a city’s residents, they likely would have responded with a resounding “yes.” Fresh off burning down the town’s thriving black business district (the so-called “Black Wall Street”) in retaliation for alleged black criminality, residents would have described the event as necessary for the safety and stability of their communities. As might have the rioters in 1860s New York who attacked more than 200 black men in anger over being drafted to fight for the Union, or the pro-Confederacy rioters in 1860s Baltimore.

But the recent black urban uprisings aren’t seen in the same way. Even though they show a historical continuity between America’s past and present, the constant reality of drug raids, pat downs, and “jump outs” is often not taken seriously as a justification of violence, because these violations of bodies usually aren’t violations of law.

It’s presumptuous to assume those who have not experienced 400 years of anti-black violence have a right to moralize on the black community’s expressions of grief and rage. As such, to the extent to which urban rebellions help expand the range of askable questions and speakable thoughts on race in America, these actions have value.

To debate whether riots help blacks win the proverbial “game” of politics ignores that the existence of such conditions should be proof enough that the game itself is not just rigged, but broken.

Lawrence Grandpre is the director of research of Leaders of a Beautiful Struggle, a Baltimore-based social justice think tank. He is co-author of The Black Book: Reflections from the Baltimore Grassroots.

John Hope Bryant — They signal the need for change

Can urban riots cause change? It’s a bit of a paradox. As Dr. Martin Luther King, Jr., said in 1968, “I think that we’ve got to see that a riot is the language of the unheard.” Sometimes it takes a riot to bring attention to needed change. Unfortunately, the new action often comes as a reaction to old pain.

As a witness to the riots sparked by the Rodney King beating some 23 years ago, I chose not to be driven by blind rage, but by a determination to change the very chemistry of this volatile brew of anger, recrimination, and recoil. The difference to my approach is that I was looking for the problem that lay underneath the problem. I wanted to unpack power and money and prosperity and repack it with poor people in mind, because it dawned on me that middle-class neighborhoods no matter their racial makeup didn’t riot; only poor ones did.

In the wake of the Rodney King riots, I founded Operation HOPE, a plan to empower the financially ill-equipped and struggling in America to participate in the only system we have: capitalism. The path I chose was based on the power of free enterprise to change lives—no different from what President Abraham Lincoln did in 1865 after the Civil War and the Emancipation Proclamation, when he called forth the Freedman’s Bureau, which created the Freedman’s Bank, chartered to teach newly freed slaves about money.

I subscribe to the simple premise that rainbows only come after storms, and I see a shining light of opportunity emerging from the dark night of tragedy and tears. Let us resolve to erase the impediments to equal economic opportunity, and strife will subside, tempers will cool, and a clearer morning of hope will break through the clouds of animosity and rage.

John Hope Bryant is the founder, chairman, and CEO of Operation HOPE and Bryant Group Companies, Inc. He is a member of the U.S. President’s Advisory Council on Financial Capability for Youth for President Barack Obama.

Was it right for Baltimore youth to rise up? Or Ferguson youth before that? Will it be right the next time people are sick of police killing them off?

Eric Holder has said, “peaceful, nonviolent demonstrations… have led to the change that has been most long lasting and the most pervasive.”

Get real. Tell that to police committing illegitimate violence on the regular—murder and brutality that destroys lives, futures, and whole people. Holder, and the system he represents, care more about CVS and broken cop cars. They greenlight police terror. A black president, a black attorney general, and still no federal prosecutions of cops killing unarmed black people!

Baltimore rises, suddenly six cops are charged. A light was shined on generations living under police crosshairs. Everyone is now forced to relate to the slogan “Black Lives Matter.” This is improvement.

A Baltimore teenager said to me, “I know Freddie [Gray]’s family didn’t want rioting… and people don’t want us destroying our community… but we don’t want police killing us. If they won’t stop, we do what we have to.”

Society was shaken. Lines got drawn. Where this goes is on us.

Noche Diaz is freedom fighter who splits his time between Baltimore and New York City. He is currently facing jail time for protesting killings by police.

This article was written for Zocalo Public Square