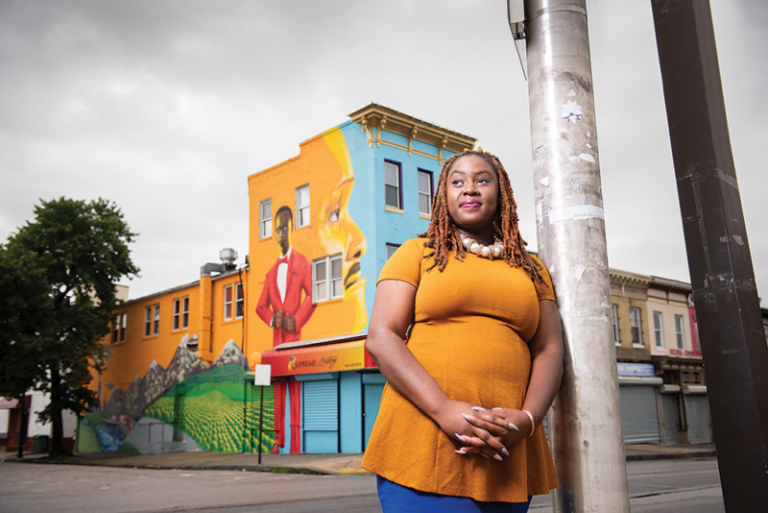 Today, few of these sites have been designated for historic preservation, and most of the institutions have been demolished. But in an effort to preserve what remains of The Avenue, and to revitalize the region at large, local community leaders have teamed up to found the Pennsylvania Avenue Black Arts and Entertainment District Coalition—which includes organizations such as Leaders of a Beautiful Struggle, the Arch Social Club, the Arch Social Community Network, Upton Planning Committee, Druid Heights Community Development Corporation, University of Baltimore Community Development Fellows Program, and more.

Earlier this month, all of the coalition’s hard work paid off when the Maryland State Arts Council (MSAC) designated The Avenue as one of the state’s official Arts and Entertainment Districts. The area includes 149 acres and nearly 15 blocks along Pennsylvania Avenue from Fulton Avenue to Dolphin Street, as well as two or three blocks east and west—making it the largest Arts and Entertainment District in the state and the fourth existing in Baltimore City. Among those in the state, it’s the only district dedicated to showcasing African-American arts and culture.

“We intentionally looked at the anchored institutions and the creative enterprises in the area,” says Lady Brion Gill, cultural curator for Leaders of a Beautiful Struggle. “We tried to make sure that we created a map that included all of those.”

The state’s recognition of the Pennsylvania Avenue District has the potential to ignite major revitalization initiatives in a neighborhood that has long been left to the wayside as other parts of Baltimore rapidly develop. “We know that people are interested in sit-down restaurants, galleries, and larger theaters in that area because all of the theaters have closed,” Gill says, mentioning The Royal Theatre and others. “Our hope is that we can curate a specific experience and identity in that area that will create the kind of arts and entertainment district that we all imagine.”

The district’s constituents, including businesses, residents, and artists, will be able to take advantage of three tax incentives. The first pertains to property expansion, which will allow residential and commercial entities to expand or build new structures within the district. There’s also a personal benefit tax for artists who offer services or produce artistic works in the district, as well as a Personal Benefit Tax for district residents and those who work in an Arts and Entertainment district. In addition, an amusement tax incentive—which allows tickets to events in the district to be sold with no sales tax.

For the first time since MSAC launched the Arts and Entertainment District designation program in 2001, both Baltimore City and the state will provide funds that not only aid revitalization efforts in those districts, but also dedicate staff to help manage and facilitate future funding initiatives.

“We are really fortunate to be designated in a time when both the city and the state are willing to invest in the arts and entertainment districts in Baltimore,” Gill says. “We will also be seeking support from our local arts and philanthropic communities because we recognize that they are a part of making Baltimore City a destination.”

In partnership with community development corporations throughout the region—including the Westside, Druid Heights, and Upton CDCs—the Pennsylvania Avenue Black Arts and Entertainment District is working to create an application process and oversight committees that will vet new development ventures in the district. The groups will work together with developers to ensure that their ideas and interests align with the needs of current residents.

Details are still in the works, but this fall, the Pennsylvania Avenue Black Arts and Entertainment District is planning an event at the Reginald F. Lewis Museum to celebrate the designation and recognize all those who helped to bring the initiative to fruition.

“We want to protect the area to ensure that the demographics remain as they are now,” Gill says. “We want to make sure we are not gentrifying out the folks who currently live in the community.”

PrevPreviousNEWS: Pennsylvania Avenue is now a state-designated black arts and entertainment district
NextFailure by Design: How “Urban Renewal” Fueled an Uprising, and How “Economic Ecosystems” May Prevent One – LBS BaltimoreNext