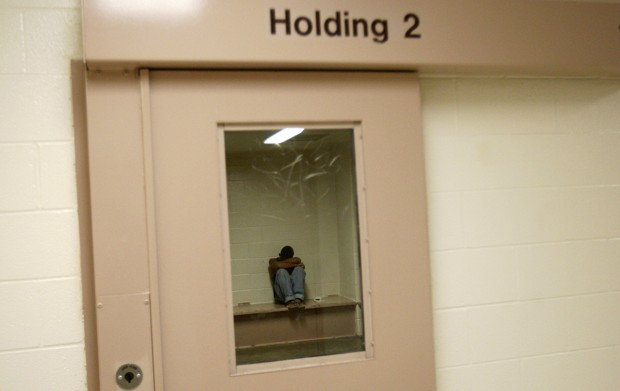 When demonstrators took over some of the streets of Baltimore Tuesday morning, blocking traffic on roads leading into downtown, they were protesting a proposal to build a new jail for teenagers in the city. On May 13, Maryland’s Board of Public Works approved plans to build a pre-trial detention center for teenagers charged with serious crimes so that they wouldn’t have to share jail space with adults.

The U.S. Department of Justice read Baltimore the riot actback in 2007 about haphazard practices such as housing teens alongside adults at the existing city jail. A previous proposal for a new youth jail, floated by then-Governor Martin O’Malley, called for a 120-bed facility that would cost about $70 million to build. But youth advocates rallied to have those plans squashed, which cleared the way for the current proposal, a 60-bed facility that will cost roughy $30 million to build.

Budgets are moral documents that give an indication about what public officials care about. In Baltimore what we see are major investments made in criminalizing our people, instead of investments being made to give us the tools to empower ourselves. The jail that is reportedly going to be built is an example of an investment that buys into a narrative of Black criminalization, as opposed to embracing the inherent value of Black life.

Funding for the new jail will come from the state budget, but so far that’s just for its construction. The full costs of jails extend far beyond brick-and-mortar expenses. Mental-health services, continuing-education classes, vocational training, jail staff salaries and pensions still need to be covered, and the state doesn’t always pick up those tabs. Cities and counties often end up incurring some of those costs, as pointed out in a new report released by the Vera Institute of Justice, “The Price of Jails: Measuring the Taxpayer Cost of Local Incarceration,” which states that “the total cost of jail is thus considerably underestimated when these outside costs are excluded.”

Researchers at Vera collected information from 35 local jails about their expenditures and funding structures to piece together a picture of the total economic burden jails cause for cities. Jails have become “one of the most significant public safety expenditures a community makes every year,” reads the report, with facilities across the nation currently holding 730,000 people—more than three times what they held in 1983.

The larger the jail, the more ancillary or marginal costs to foot. King County, Washington, ends up eating about 21.5 percent of costs for its Seattle jails (which include both adult and juvenile facilities) that fall outside of the jail budget, while New York City absorbs more than 53 percent of those costs for its jails. How can cities minimize these costs? By reducing the inmate influx. The takeaway from the Vera Institute’s report:

The only way localities can safely reduce the costs incurred by jail incarceration is to limit the number of people who enter and stay in jails. This is no small task. How and why so many people cycle through jails is a result of decisions dispersed among largely autonomous system actors. This means that the power to downsize the jail is largely in the hands of stakeholders outside its walls. So only by widening the lens—looking beyond the jail to the decisions made by police, prosecutors, judges, and community corrections officials—will jurisdictions be able to significantly reduce the size of their jails, save scarce county and municipal resources, and make the necessary community reinvestments to address the health and social service needs that have for too long landed at the doorstep of the jail.

Tuesday, the MacArthur Foundation announced that it will award $150,000 grants to 20 cities that are creating plans to reduce their local jail populations. New York City, New Orleans, and St. Louis County are among the recipients. Baltimore is not, though foundations like Annie E. Casey and Open Society Institute have been working with the city for quite awhile on criminal justice reforms.

Some argue that jail budgets can be reduced by cutting programs like continuing-education classes and workforce training. The new Baltimore youth detention center is slated to have many of these kinds of programs. But the Vera Institute finds that those costs usually make up an insignificant amount of jails’ overall budgets.

“Therefore,” reads the Vera Institute’s report, “these types of cuts—often the most palatable to make—will never generate enough savings for communities to reinvest in alternatives and may even lead to some unintended and unwanted consequences, such as higher recidivism rates and higher medium and long term costs.”