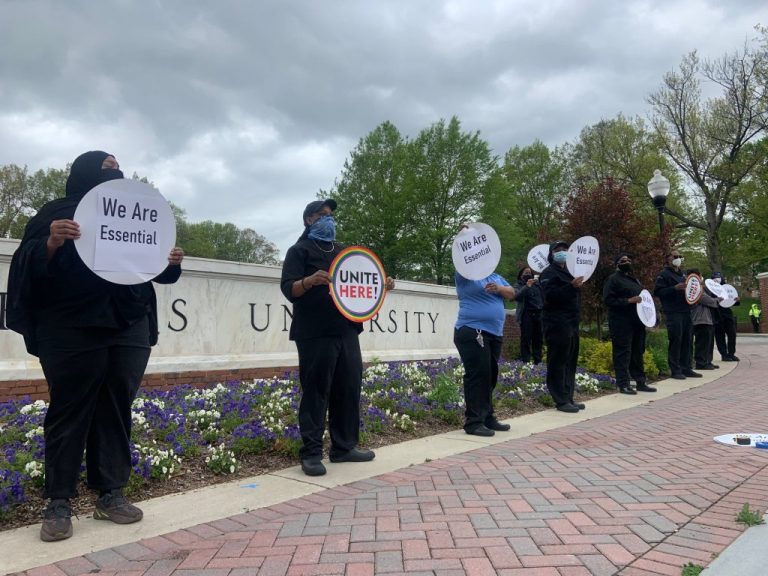 On May Day, food service workers led a socially distanced protest at the campus of Johns Hopkins University in Baltimore, Maryland, taking part in the international day of action to defend workers and highlight the disparate impact COVID-19 is having across the country. Donning masks, the workers read the names of their 188 colleagues who have been laid off amid the pandemic, 98 percent of whom are Black, according to UNITE HERE Local 7.

The demonstration comes as Johns Hopkins, a world-renowned medical and research institution, has mobilized its resources to combat the pandemic. The university had an estimated $4.35 billion endowment in 2019. Johns Hopkins University and Hospital have been helping lead the international response to COVID-19, from mapping its spread and tracking testing data, to developing a vaccine. But its lowest-paid Black employees say they feel like they have been left behind.

The dozen or so demonstrating workers demanded the university honor a promise to give laid-off workers four weeks’ pay. They cite negotiations with officials that resulted in a deal, from which the university abruptly withdrew.

Over 33 million — or one in five — U.S. workers have filed for unemployment during the pandemic. State unemployment websites have crashed under the volume of claims. Many are ineligible or have not received their $1,200 CARES Act stimulus checks or unemployment benefits. Black and Latinx workers are more likely to work jobs impacted by lockdown orders, and 98 percent of UNITE HERE’s over 300,000 members, who work in food service and hospitality, have lost their jobs.

“Honor your commitment, you got the money,” said Alberta Palmer, an organizer with UNITE HERE Local 7, which represents Johns Hopkins workers, who are subcontracted through Bon Appétit, a food service management company.

“I’m disappointed in Hopkins,” said Ganesha Rouse, who has served food at the school for eight years. “We are always being mistreated by this university.”

“[The pandemic] hit all of us hard, and it’s hit the Black community even harder,” said Palmer. “For a lot of us, this is an economic pandemic as well.”

COVID-19 has ravaged Black communities, and not just in terms of the disproportionate rate of illness and death. The virus’s health impact is amplified by a century of discriminatory housing policies like segregation and red-lining, which denied wealth building opportunities to Black families and contributed to the nation’s racial wealth gap.

“Compared to non-Black communities, wealth is not a protective factor for many ailments which exacerbate COVID-19,” said Lawrence Grandpre, director of research for Leaders of a Beautiful Struggle, a Baltimore-based think tank. “Across the socio-economic spectrum, Black people are subject to disproportionate risk for obesity, high blood pressure, and heart disease, all preexisting conditions which create higher risk of morbidity for COVID-19.”

One in three Black households in Baltimore have zero net worth, and two in three face liquid asset poverty, or lack the savings to cover basic expenses for three months if they lose their jobs, a 2017 study by the think tank Racial Justice Now found. In Baltimore, African American median income ($33,801) was 50 percent lower than their white ($62,751) counterparts, and 59 percent of Black renters are rent burdened, meaning they pay more than 30 percent of their income on housing, according to the study.

“A lot of us [workers], we’re from Baltimore, and we don’t have a lot of resources,” said cafeteria worker Latifah Pearson.

Pearson says she’s still working, but her hours have been cut, and she expects to lose her job in the coming weeks.

Johns Hopkins says its planning to reopen its campus in the fall, but it has slashed spending across the board, and students say low-wage workers bear the brunt of the cutbacks and are campaigning to have them rehired.

“Ron Daniels, the president of Johns Hopkins University, took a 20 percent pay cut to move him from an income of $2.7 million to $2.16 million,” said Barae Hirsch, a senior studying sociology and international studies at the university. “Meanwhile, low-wage service workers are being laid off.”

Johns Hopkins students have a long history of organizing in solidarity with campus workers.

“It’s particularly unconscionable for Hopkins to leave their workers out to dry as it’s presenting itself to be a leader of the struggle against the pandemic,” said Corey Payne, a graduate student and organizer who has been working to supportcampus workers for the past five years.

There are growing calls for universities, especially those with large endowments, to avoid projected mass layoffs. Over 100 universities in the U.S. had endowments over $1 billion in 2019.

“Layoffs should be the absolute last option for universities and colleges, particularly those with significant endowments,” said Paul Weinstein Jr., director of the MA in Public Management program at Johns Hopkins University and a senior fellow at the Progressive Policy Institute. “Schools should look at other approaches first, including delaying capital expenditures, cutting salaries for the highest-paid employees, suspending retirement benefits for one year and tapping into endowment funds when they legally can.”

Universities often face restrictions in how they are able to spend their endowments. But Weinstein says Congress could provide legal protections from donor lawsuits.

Beyond not laying off its predominantly Black workers, Grandpre suggests institutions that want to help address COVID-19 health disparities in Black communities might start by examining their own role in fomenting such disparities.

In the early 1950s, Johns Hopkins harvested the genetic material of Henrietta Lacks, an African American woman, without her consent. These cells became invaluable to medical research (such as the development of the polio vaccine), because they continued to multiply instead of dying off. Lacks’s contribution to science was only recognized after the publication of The Immortal Life of Henrietta Lacks by Rebecca Sloot.

Hopkins has also come under fire for knowingly exposing children to lead poisoning. It’s also been accused of gentrifying east Baltimore and displacing Black residents to expand its medical campus, which earned it the nickname of “The Plantation” by its Black neighbors, according to the 2018 book, Ghost of Johns Hopkins, by Antero Pietila.

“Encouraging early interventions and screening in the Black community won’t be effective until the fundamental power imbalances between the Black community and the medical establishment are addressed,” says Grandpre. “The reality is COVID-19 is simply speeding up and revealing the slow-motion epidemic produced by racism/white supremacy.”

Standing in front of the sprawling campus of one the U.S.’s wealthiestuniversities, workers are worried about their future.

Jenica Hudson, a cook who has worked at Hopkins for the past six years and was laid off in mid-March, says she was already living paycheck to paycheck before the pandemic.

“I do have savings, but it’s been depleted,” Hudson said.

She relied on family for help to pay rent on May 1. “I fortunately have a loving mother,” she added.

Hudson has been searching for new employment, but she fears the available opportunities, like a job at an Amazon warehouse, could put her and her family at risk.

In a statement, Johns Hopkins said it “remains steadfast in our commitment to our workforce. We regret that the slow-down in university operations and the university’s losses due to COVID-19 are necessitating some furloughs and lay-offs.”

Johns Hopkins argues it is unable to pay laid off workers because it could jeopardize their eligibility for CARES Act stimulus payments.

“We have not reversed course but instead have been exploring the most beneficial options for these valued team members through their employer,” Johns Hopkins said in a statement.

“We offered to them several different ways that the workers could be paid that would not have interfered with any of their other benefits. And then they just stopped communicating with us completely,” she said.

UNITE HERE Local 7 did acknowledge a $15,000 donation from the Baltimore-based Research Associates Foundation, which provides small grants to support local progressive organizing. The union, which is continuing to cover worker’s health insurance, has yet not decided how to distribute those funds.

Workers say they have yet to receive any of the promised support from Johns Hopkins.

“For [Hopkins] to deny what they promised is a stab in the back,” Hudson said.