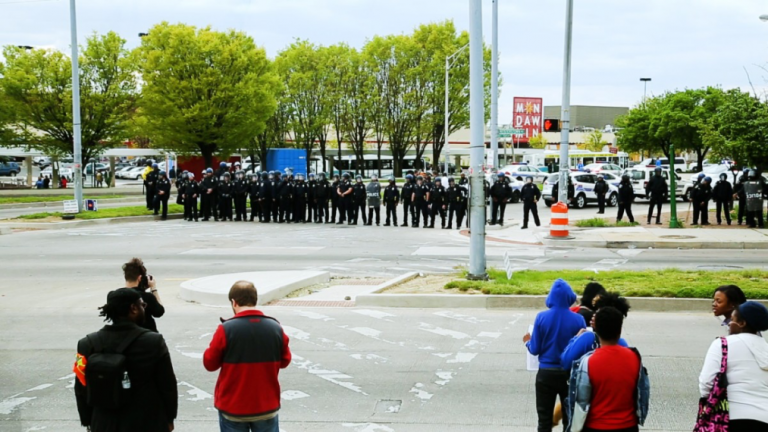 Following the Baltimore Rising screening at DOC NYC, a panel comprised of director Sonja Sohn, producer Marc Levin, and film subjects Kwame Rose and Davon Love reflected on their respective roles in making the film. Though the panelists come from diverse backgrounds and disciplines, they were in agreement on one thing: In order for this project to succeed, the work had to be bigger than them.

Baltimore Rising chronicles the death of Freddie Gray — an unarmed black man who died of a severed spine while in police custody — and the grassroots response by students, retired gang members, policy activists and local police officers.

Sohn is beloved by Baltimore residents for her memorable performance on The Wire and subsequent investment in the community. Even still, she said that “being intentional about what I can bring,” helped her align with the community’s needs first.

“When I came back to the city [after Gray’s death], I heard a lot of folks talking about wanting to ‘reframe our narrative’. When I heard that, I said, ‘Oh, well narrative storytelling is what I do!’” Soon after, Sohn met some of the subjects she would document in the film, each concerned by the way their protests and community were portrayed by the national media. “Seeing that the city wanted to change their narrative, I thought there might be some way I could be useful.”

Kwame Rose, one of those subjects, had a similar understanding of his involvement in the documentary and the uprising. “In our society, we say things like, ‘If you’re not doing it my way, it’s not the right way,’” Rose told the audience. “I think when we look at a story like this it reminds me we all have one goal. We may have different tactics, but as long as our end goal is reached, we can all play our part.”

Rose’s high school debate coach and mentor, Davon Love, cited Baltimore’s legacy of civil rights activism as the basis for their work. “One of the reasons I was very thankful for Sonja asking me and Leaders of a Beautiful Struggle (LBS, his justice-oriented policy think tank) to be in the film is that we’re really clear about the importance of the black radical tradition.” Though LBS is independently operated, Love believes their success stems from being “trained by black folks in movement history.”

Love and Rose are ensuring their efforts will outlast them by building future generations of leaders, an investment exemplified by the mentorship Love has provided Kwame. “It’s important for us is to give young people the tools to navigate these kinds of things,” Love said of the youth-led, police brutality protests featured in the documentary. He was grateful that Baltimore Rising showed the younger members of LBS taking vital responsibilities because it will allow viewers to “see them as actors in their own reality that can transform society for themselves.”

“I think now, people who don’t have a voice have a voice.” Rose said. “Not only that, we have a story. And the story isn’t over — we’re still writing it.”