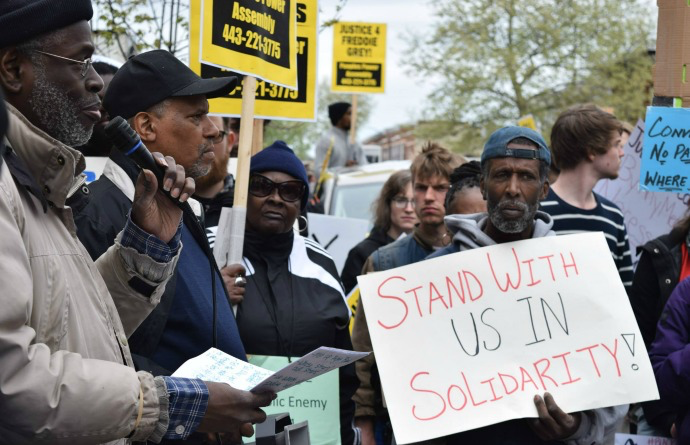 As people across Baltimore prepare for another day of mobilizations to demand justice for the late Freddie Gray, voices from the city’s grassroots are calling for broader U.S. society to dig beneath the police and media spin of “looting” and “protester violence” and listen to expressions of outrage and demands for deep change emanating from the streets.

“The systemic oppression we’re seeing is the result of decades of people ignoring the cries of black people in Baltimore,” Adam Jackson of the Baltimore-based grassroots organization and think tank Leaders of a Beautiful Struggle told Common Dreams over the phone. “People are moralizing about trash cans getting burned. But you should moralize on why black people are being killed by police. Talk about structural oppression.”

“Property destruction is not as important as black life,” Jackson added.

Thousands of people took to the streets of Baltimore on Monday following the funeral of Freddie Gray, a 25-year-old black man who died after his spine was mostly severed while in police custody earlier this month. The mobilization erupted into an expression of outrage in a city with a troubling history of police violence against black people, including a high rate of killings by police. The Baltimore Sun reported last year that the city has paid “about $5.7 million since 2011 over lawsuits claiming that police officers brazenly beat up alleged suspects,” most of them black.

It was that police force that was heavily deployed against protesters on Monday, joined by U.S. military service members with the National Guard. Late Monday, nation-wide news outlets quickly spread stories of “protester violence.” They were aided by questionable—and widely circulated—claims by police that an alleged gang truce posed a “credible threat.”

But witnesses told a different story: of police violence and targeting of protesters, including children. Brian Arnold, a former Baltimore City high school teacher, shared a counter-narrative on Facebook that quickly went viral:

I want to make this as clear as possible:Step 1: the police created a “credible threat” about some high school students gathering at Mondawmin to start trouble.

Step 2: the police showed up in force and riot gear before the students got out of school at Mondawmin, which is a major public transit hub, and SHUT DOWN THE TRANSIT, guaranteeing the kids couldn’t leave.

Step 4: the kids understandably responded to being stranded and maced by throwing rocks.

Step 5: the media starts reporting it as “a riot” and “violent protesters.This is 100% bought and paid for by the police department. This is absolutely vile.

“The cynicism inherent in trapping school kids is a reflection of police attitude towards those kids,” Arnold told Common Dreams, adding that, as a former teacher, he saw firsthand that police violence against children “is a prevalent issue in the community.”

Numerous accounts of police brutality emerged on Monday, including reports of law enforcement throwing rocks at protesters. But many from within this city, which is 64 percent black, charge that the violence goes far deeper.

Laurence Brown, assistant professor at Morgan State University and member of the Baltimore Redevelopment Action Coalition for Empowerment told Common Dreams, “The narrative now is on the looting and rioting taking place. People miss the underlying structural issues that are happening everyday. I would call it structural looting in form of policy.”

Police killings of unarmed black people are part of this larger picture, he said. “And now you have this national movement, but you also have a national outrage. Seemingly every week we see a new video of an unarmed black person shot and killed by police in America. If we don’t see a video, we hear a report. In this moment of national outrage, we’re at a crescendo where folks are fed up.”

The Baltimore-based human rights organization United Workers said in a press statement released Tuesday that the racism and poverty plaguing Baltimore have reached a “breaking point.”

“Why do 40,000 properties sit vacant while 4,000 are homeless, and another 154,000 face foreclosure and eviction annually?” asked the organization. “Why do 62 percent of job seekers report that they are unable to find a job that offers a living wage, and almost one in four cited their own criminal histories as a barrier to employment? Why do we utilize economic development subsidies to downtown developers that result in less tax revenue for city schools? Why does our Mayor champion a toxic trash burning incinerator project for Southwest Baltimore, already home to dangerous levels of lead, mercury and other toxic pollutants? And why after 16 days is there still no answer to the question why was Freddie Gray arrested or how is spine was broken?”

“Our communities have dignity,” said United Workers youth leader Destiny Watford. “When we see our human rights being violated we have acted and will continue to push for our rights to be secured—the rights to breath clean air, have access to safe and affordable housing and a job with dignity.”

Jackson of Leaders of a Beautiful Struggle emphasized that “the atmosphere in Baltimore is positive, if extremely hectic. People are concerned about being positive, moving forward as a city, and moving forward to win justice for Freddie Gray.”

Baltimore communities have organized street medic crews to tend to those wounded in the protests, as well as legal support—including a bail fund—for those detained and arrested by police. Community clean-up efforts took place throughout the city on Tuesday, and some establishments—including the cooperative bookstore and restaurant Red Emma’s—are serving free lunch to students who face school closures. Grief counselors are making themselves available to those in need of support.

Meanwhile, solidarity actions are planned across the country, from New York to Ferguson, including Chicago, where the police officer who shot and killed unarmed black woman Rekia Boyd was recently found “not guilty” by a judge.

“This is part of larger dialogue and conversation about justice for black people,” said Jackson. “People are dissatisfied with their conditions and are speaking up because they’re sick and tired.”

PrevPreviousWhy do we look? On Gazing at dead Black bodies
NextMedia follows people, just not THE people, in BaltimoreNext