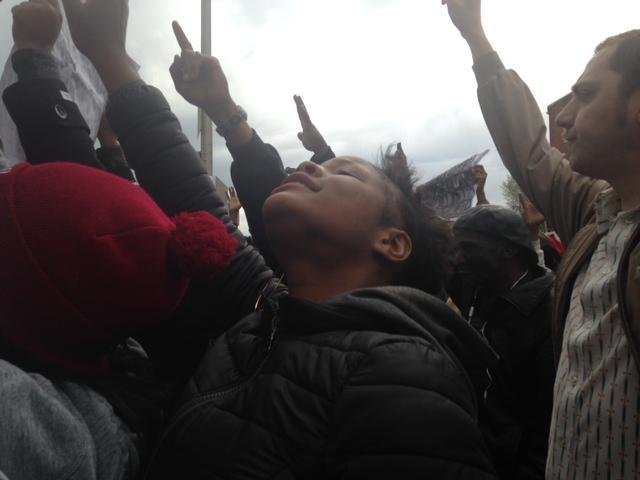 Freddie Gray, a young black man from the city’s west side, died from a severe spinal cord injury suffered while in police custody on April 19, 2015.

His death touched off demonstrations and unrest and it raised crucial questions about the relationship between city police and the black community.

And even police had questions. The day after Gray’s death, Deputy Police Commissioner Jerry Rodriguez told reporters there were things he knew and things he didn’t know.

He said the department would investigate exactly what happened when Gray was shackled and put in a police van without a seatbelt, which is against department policy.

It seemed he was referring to a “rough ride” – a term well-known in Baltimore’s black neighborhoods that describes how police officers drive suspects in the back of their vans on a twisting, turning course, tossing them around in the back of the van.

The days of marches and protests finally erupted in rock and bottle throwing, burning and looting in the city just hours after Gray’s funeral.

Today, many are wondering what’s changed with that relationship.

Adam Jackson of the advocacy group Leaders of a Beautiful Struggle says people were responding not just to Gray’s death, but to years of racist policies, from Jim Crow to redlining to policing disparities and a lack of job opportunities.

“People need to be focusing not just on that flashpoint, that incident,” Jackson says. “Because the Baltimore Uprising was a point in history, but the things that caused it to happen are generational in nature.”

He says his group works in Annapolis every year to push bills through the General Assembly that would put civilians on police trial boards and open police officers’ personnel records to the public. He says those are things that would make the police department more transparent and accountable to the public.

“The only metric that should be important in terms of relationship between the community and the department is the amount of civilian oversight of the department,” Jackson says.

But to have a long-lasting impact, laws need to be changed, not just policies, he says. And that will take longer than five years.

Some of the department’s deeper issues have been exposed since Gray’s death.

Most recently, federal prosecutors have indicted 15 city police officers in the Gun Trace Task Force scandal. What was once considered an elite squad was found to be robbing citizens, planting evidence, conducting illegal searches and collecting fraudulent overtime pay.

A year after Gray’s death, The U.S. Justice Department released a scathing report that detailed what it called “a pattern and practice” of unconstitutional policing in the department.

The authors wrote that from 2010-2015, local prosecutors rejected more than 11,000 charges brought by city police officers because they lacked probable cause or otherwise didn’t merit prosecution. Among other things, they cited many examples of what they called “unjustified arrests.”

Because of that report, the department and the city of Baltimore entered into a federal consent decree that is supposed to bring sweeping changes to the police department.

Kenneth Thompson leads the Baltimore Police Monitoring Team, the group in charge of figuring out how to make the changes called for in the consent decree.

In a recent interview on WYPR’s “On the Record,” he told Sheilah Kast the group has thus far worked on new training for the officers and instituted new internal policies for the police force.

“These are foundational fixes that the department desperately needed,” Thompson said. “I would think we should see some of the fruits of our efforts for the last two years.”

But the department needs new technology, Thompson said. And that could cost tens of millions of dollars.

Critics like Jackson, of Leaders of a Beautiful Struggle, say that having eyes on the department is a good thing, but that won’t solve all the problems.

“I think the consent decree gives the department a blank check,” he said. And adding money, new technology, and new policies to the department won’t change the core problems of accountability.

Thompson however says the monitoring team is looking for signs of change. He commissioned Morgan State University to do a survey as a baseline to determine if the department is making progress.

That survey, recently released, found more than 60% of participants say they are dissatisfied with the department.

The Fraternal Order of Police didn’t reply to a request for comment and a police spokesman said in an email no one could sit for an interview, but that the department has “undergone a major overhaul, several times, in command personnel as well as policy and procedures.”

But asked if anything has really changed in the department, Jackson answered with a question of his own.

“How am I doing things differently,” he asked. “What are we doing as a community to make sure that these systems are changing or destroyed?”