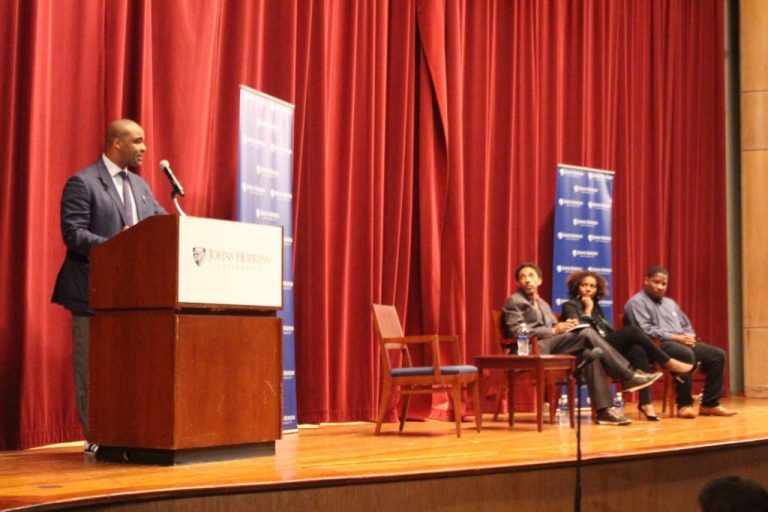 The JHU Forums on Race in America presented a panel on “The Next 50 Years: Black Power’s Afterlife and the Struggle for Social Justice,” Tuesday, Sept. 27 in Shriver Hall.

The discussion panelists were Robin D.G. Kelley, the chair of U.S. History and African American Studies at UCLA; Dayvon Love, the co-founder of Leaders of a Beautiful Struggle, a Baltimore-based think tank which promotes the public policy interests of black people; and Salamishah Tillet, an associate professor of English and Africana Studies at the University of Pennsylvania and the co-founder of A Long Walk Home, a national non-profit that uses art to inspire young people to end violence against women. Nathan Connolly, associate professor of history at Hopkins, moderated the panel discussion.

Panelists examined the future of anti-racist politics, possibilities for anti-racist school curriculums, the creation of a critical citizenship and the effects of the Obama administration on race relations in America.

Connolly began the panel by reflecting on the history of the Black Panther Party.

“Now, it’s not coincidental that we are having this event fifty years after the establishment of the Black Panther Party in Oakland in 1966 as of October,” Connolly said. “One of the things that’s often looked over with the Black Panther Party is that they were very dedicated to empowering working class people across color lines. So what I’d like to look at for a moment is how there can be a space for consensus politics throughout our fight against anti-black racism.”

Love argued that distinct black intellectual traditions are an essential part of the fight against racism.

“I think unfortunately that many of us are socialized to understand activism as merely a response to structures of oppression, which in part it is,” Love said. “But activism should also be about the importance of building independent, black institutions that can negotiate their status in a largely white, patriarchal society. These institutions should have the ability to promote the intellectual work of people of African descent that does not rely on the intellectual traditions of European scholarship.”

These independent institutions are essential components in the creation of long-term social justice movements, according to Love.

“It’s really important that we focus on rediscovering the intellectual traditions of people of African descent, which are often blocked out of the public mainstream, so we can determine the kinds of intellectual work that can actually contribute to building the kinds of institutions that can produce sustainable activist movements,” Love said. “We need to a build an infrastructure for now that can be passed on to future generations, so they can use the sustainable institutions built by this intellectual tradition as a template for engaging in issues as a collective.”