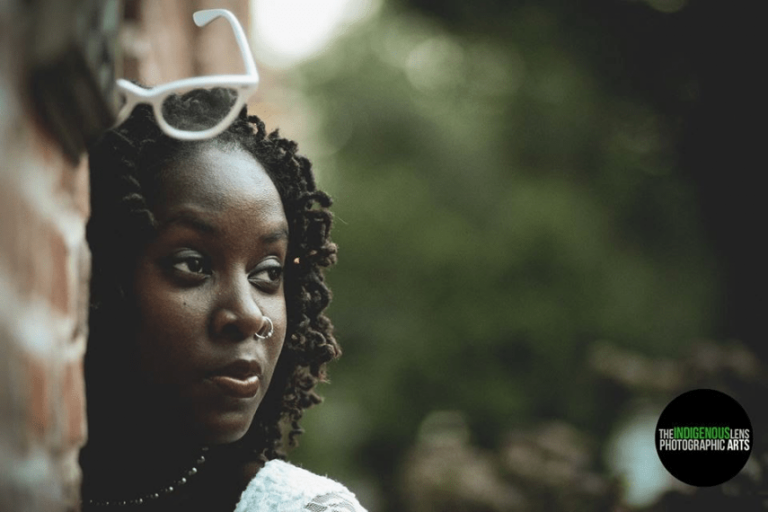 Before qualifying for this prestigious competition, Brion was named the Baltimore Grand Slam Champion—the first female to win in ten years. Along with four other Baltimorepoets, she was then sponsored to compete in the National Poetry Slam hosted in Oakland, California, a week-long group tournament comprised of 72 teams. “It was definitely an anxiety attack all the time,” Brion shared, noting that these slams are like Olympic competitions. “It was an awesome experience to be among this many amazing writers and lyricists.”

At Howard University, where Brion received her undergrad degree, she was the “go-to poet on campus.” She performed at numerous campus events and explored many open mic venues in D.C., including Spit-Dat. By far her favorite place to perform, Brion loves the energy and community this small venue exudes. “So many poets get nurtured in that space,” she remembered.

While studying to complete her M.F.A. in Creative Writing and Publishing Arts at UB, she continues performing locally and is a deeply committed community activist. She is the resident poet for Leaders of a Beautiful Struggle (LBS), a youth-run organization that pursues equality for the black community in Baltimore. Brion and fellow LBS members served on the frontlines during the Freddie Gray controversy, and the group continues to fight against police misconduct and other civil rights issues.

Brion uses her poetry—focused on the black struggle, gender equality and women’s empowerment, and religious themes—to merge the space between art and activism. “Throughout history, you have artists who are furthering the movement,” she stated. She also volunteers with Dew More Baltimore, a grassroots organization that brought the national Youth Poet Laureate program to Baltimore. This program offers poetry workshops and competitions to at least 300 youth annually, who Brion and other poets teach once a week in over 20 Baltimore City schools.

Following in the footsteps of renowned poets like Amiri Barraka and Maya Angelou, Lady Brion hopes to turn her passion into her livelihood. Using her poetry as a tool to help others, she wants to become a professional poet and teach young aspiring writers at historically black colleges and universities (HBCUs). “I know the transformative power of spoken word, and I want to use that to better my community,” said Brion.