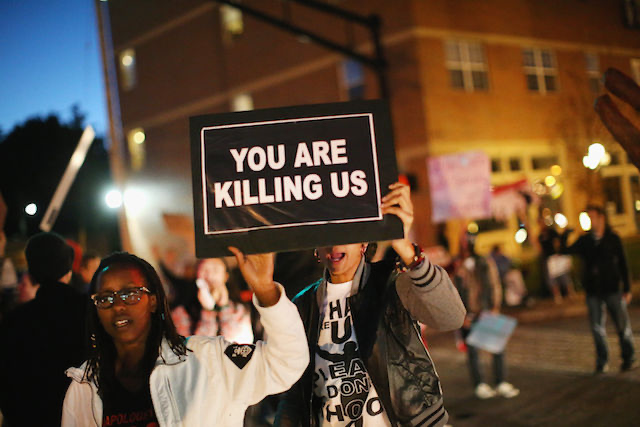 It would be hard not to notice that some of the police officers who have been charged or indicted in high-profile brutality cases are people of color. For instance, in February, a Chinese-American officer from New York City, Peter Liang, was charged with manslaughter for fatally shooting Akai Gurley, an unarmed black Brooklyn man, in the stairwell of a public housing development. And the six Baltimore cops charged with killing Freddie Gray include three black officers. These outcomes stand out in a national pattern in which police are rarely charged with misconduct and even more rarely convicted of it. As police departments get better at hiring people of color, I suspect that we’ll see more bad behavior involving officers of color. That may make it harder to focus on the systemic racial bias at the heart of bad policing. To do so, we will need to redefine racism as systemic, hidden and unconscious, rather than as individual, overt and deliberate.

Hoping that officers of color will improve relations between departments and communities of color, various parties have been pushing for the hiring of more officers of color as a key intervention. Charles Ogletree, executive director of the Charles Hamilton Houston Institute for Race and Ethnicity at Harvard, told the U.S. Commission on Civil Rights in 2000 that such hiring was critical “so that the communities of people of color will begin to see a police force that ‘looks like us.’” Reporters noted that the Ferguson Police Department had only four officers of color for a community that is 66 percent African-American. The NAACP asked Providence, Rhode Island, mayor Jorge O. Elorza to see to the hiring of high-ranking black officers, and the Minneapolis Police Department is working hard to diversify their slate.

But racial diversity might not be the only factor that determines whether a particular officer is the right one for a particular community – class, gender and sexuality may also matter.

Last weekend, I met Dayvon Love, director of policy and research at Leaders of a Beautiful Struggle in Baltimore, who said that his community wants to see officers who actually live in their city. Most police officers I know don’t indeed live in the city that employs them, but in the suburbs. Love’s press for the hiring of local officers suggests that class might be a factor in how a low-income community of color might be policed. In a piece I wrote last year for Al Jazeera on police reform, I noted that an inflated sense of one’s own masculinity correlated to more aggressive action, so gender also seems to matter.

But having even the most diverse workforce won’t remove the need to do two critical things – address the prevalence of hidden, unconscious bias against black people and examine the racial impact of all of a department’s policies and practices, regardless of who is carrying out them out.

The actual implementation of police procedures is an arena ripe for these unconscious biases to emerge with terrible consequences. That phenomenon is called implicit bias, and it exists in all of us. I’ve observed a wrong use of implicit bias out in the world – often people think it means that we all have biases against each other, and these biases are evenly distributed. But they are not. We all do have biases, about ourselves and others, but those in this society overwhelmingly favor white folk. In one study, researchers used video to measure shooting responses [PDF]. Officers were told to shoot the armed man, whose image was sometimes black and sometimes white. Participants fired faster at armed targets if they were black, and more quickly decided not to shoot unarmed targets if they were white. White and black officers had similar responses, so there wasn’t much difference in decision making based on the identity of the cop. From recruitment to hiring to training, solutions to implicit bias are emerging all the time, and they need to be in every police chief’s toolkit.

Those solutions go far beyond recruiting and hiring people. They include modes of community policing, determining probable cause for a stop, and supervision of officers. Rather than focusing all the attention on diversifying forces, we should be asking police departments to examine all their work for its racial impact. Colorlines’ publisher, Race Forward, has a racial equity impact assessment that provides a helpful framework, and dozens of cities are looking at the Governing for Racial Equity network as a potential support for change.

Days after Baltimore police were indicted in connection with Gray’s death, a Cleveland judge acquitted Michael Brelo, a white officer, in the 2012 killing of Timothy Russell and Malissa Williams, who were black and unarmed. That outcome is much more in line with business as usual, and there will be more of them. The next acquital may be the verdict in the Tamir Rice case.

It is certainly critical to make sure that officers who commit crimes and make mistakes are properly dealt with, but getting rid of bad apples won’t create the safe, respectful treatment everyone deserves from the police. To get to that ideal treatment, we have to move beyond diversity goals to actual transformation of everything that happens in a police department.

PrevPreviousWhat Incarceration Costs Cities
NextSmile for the Camera: The Representational Limits of ‘The Wire’Next