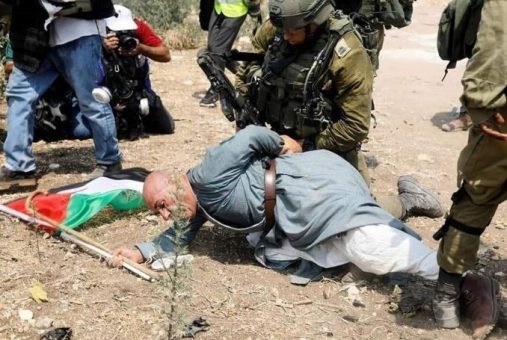 From Palestine to Turtle Island: When All Else Fails Oppressors Blame the Victim

Reflecting on the 2020 election, Onyesonwu Chatoyer wrote: “One thing I’ve been reflecting on today is how much election discourse is just poor and working-class people” blaming each other “for not participating in the right way.” An organizer for the All African People’s Revolutionary Party—New Mexico, Chatoyer understands that “the people who get the most blame have the least to do with how this whole process goes.”

While on the other hand, it is “the people who control it all—and who create the ideological, material, and political conditions that drive how poor people participate—” who get virtually no reproach at all.

After the finale of the never-ending election on November 7, voters who cast their ballots for Joe Biden—and probably some who didn’t vote or voted for a third party—celebrated in the streets of major cities. It was a well-deserved reprieve after four years of being gaslighted by Donald Trump.

There was also a break from the endless analyzing of why people voted for which candidate or perhaps didn’t vote at all. In doing so, as Chatoyer notes, blame almost always gets placed on the most vulnerable who have the least stake in the mainstream political system.

After all, it’s much easier to blame people for not voting and/or not voting in the “correct” way than to look at the real root of why people behave the way they do. It is also perhaps more satisfying because it doesn’t destroy the myth we are now on the road to progress.

For example, rather than relying on standard analyses regarding the “mystery of the Black Male/Black Woman voting gap,” Chatoyer looks to Lawrence Grandpre for some answers. More black men than women are disenfranchised due to “felony disenfranchisement,” notes Grandpre, while what he doesn’t say is that those black men under 50 know that Biden’s 1994 crime bill is partly responsible for their incarceration.

“Why doesn’t mainstream media report this?” asks Grandpre. Because mainstream media and the Democratic party, he replies, in answer to his own question, “would rather vote shame and stoke gender divides based on bad stats” than do the hard work of investing in communities that then might respond with a larger voter turn-out. Moreover, he continues, “they are also afraid that an agenda built [to] address these issues would alienate white suburban women, many of whom work at the nonprofits built off managing this suffering which Black voters are demanding they get the resources to address themselves.”

Structural change is much harder in the end, and it won’t come about through merely voting. It requires grassroots organizing along with convincing enough people that neo-liberalism is not an effective means to fight fascism. Moreover, as long as both Biden and Harris give unqualified support to the fascist state of Israel, saying good-bye to Trump, which will bring a measure of well-deserved relief, is not enough to declare the triumph of anti-fascism in America.

While all eyes were on the battleground states that eventually turned the tide, Israel escalated its demolition of Palestinian homes. Moreover, all of this is done within a legal framework, as Ramzy Baroud explains:

“Israeli racism is not random and cannot be simply classified as yet another human rights violation. It is the core of a sophisticated plan that aims at the political marginalization and economic strangulation of Israel’s Palestinian Arab minority within a constitutional, thus ‘legal’, framework.”

“Without fully appreciating the end goal of this Israeli strategy,” Baroud concludes, “Palestinians and their allies will not have the chance to properly combat it, as they certainly should.”

Fascism does not always rise to power on the shoulders of brown-shirted troops. It can go undetected. Indeed, its success in Israel is often aided by the same victim-blaming strategy that was deployed against various populations in the recent US elections.

For example, under pressure from Palestine solidarity activists, Joe Biden’s campaign back in May 2020 removed language from its platform that was deemed racist and insulting to Palestinians. Originally, Biden’s statement said that his administration would “firmly reject the BDS movement, which singles out Israel – home to millions of Jews – and too often veers into antisemitism while letting Palestinians off the hook for their choices.”

A few days later, that victim-blaming line disappeared, only to be replaced with a pledge to “firmly reject the BDS movement – which singles out Israel and too often veers into anti-Semitism – and fight other efforts to delegitimize Israel on the global stage.”

In the end, life will go on like before, but so will resistance. To the joy of the international community, hunger-striking Palestinian detainee in Israeli jails, Maher al-Akhras, negotiated an agreement with the Israeli government to release him on November 26th, thus ending his ordeal which lasted for 103 days.

In the words of Ramzy Baroud, introducing this article on Facebook:

“Folks have invested a lot of faith in elections and bourgeois politics in general, and have not seriously interrogated the material and political nature of white supremacy within this settler-colonial project in the midst of serious capital decline and decay. Nor built alternatives (cause in truth most don’t see the need yet, and this is coming from being knee deep in a municipal effort to construct one).”

“We are going to have to break with Liberalism and all of its trappings,” concludes Akuno. “Capitalism cannot be reformed or tamed, and continuing to ally with those pursuing that path will continue to lead to dead ends. At some point another road must be taken by those wanting to see a better world.”

As Baroud, too, concluded, freedom requires some sacrifice. In this case, it means letting go of the idea that merely voting every four years will bring about that better world. It also requires, as Chatoyer suggests, letting go of attempts to “shut down or shame analysis of the present moment coming from the left.” Now is the right time to do this, not some utopic moment in the future.