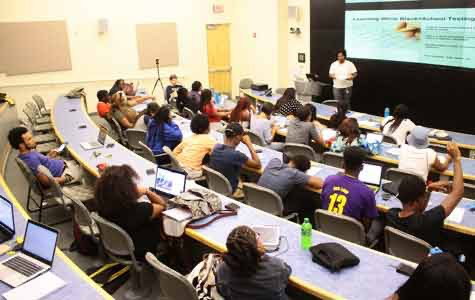 The three-week residential debate learning boot camp’s mission is to integrate debate with facilitating social justice in the black community. The camp began July 12 and runs until August 1.

The LBS is “a community think-tank, designed to produce and advocate for policy solutions to problems faced by everyday people in Baltimore,” according to co-founder Dayvon Love. LBS founders are former national college level competition winning debaters.

Adam Jackson, CEO of LBS, and ECLI program director said, “LBS is a model for using debate as a tool to get involved with social justice issues.” He added, “ECLI is the only debate boot camp hosted by an HBCU.”

Adam Jackson and Assistant program Director Brion Gill run the program with a staff of 15 people. Staff members are composed of African American former college national debate champions and ECLI alumni. They designed the program out of their own debating experiences.

“There was no social justice debate camp in the country,” said Jackson.

“We wanted to create an environment where you put your mind, body and spirit in the debate,” said Gill.

This year’s students hail from the Baltimore metro area and from as far away as Dallas, Texas. The group is 95 percent black. Sixteen are female and thirteen are male. Students are between 14 and 18 years old.

Camper Abbie Booker has learned a lot during her time at Coppin. “This is the only camp that is an asset to my identity and the way I choose to express myself,” she noted.

“I learn things that I would not learn

in the regular school curriculum,” said Baltimorean Morgan Kirkman. Morgan, who wants to be a civil rights attorney or a sports psychologist, said she found a sense of community and belonging at debate camp.

Salecia Barney who is the only black debater in her high school said, “The camp helps me build better arguments. It helps me be a better activist and reshapes the way I look at the world.”

Michael Franklin was inspired to come to the boot camp by a friend. He liked the idea of critical debate and wanted to use it to do more work in his community.

“I want to develop arguments to learn how to become a strong leader to produce change,” said Larry Taylor III. He wants to be an attorney and one day become president of the United States.

A typical day for students starts at 8 a.m. in the morning when they eat breakfast. The students are then divided into two debate labs. They work from 9 a.m. to 4 p.m. with an hour’s break for lunch. Lab facilitators instruct students on debating skills and techniques integrated with social justice content and cultural identity.

The students take field trips, work on community projects and do volunteer work to deepen their experiences. The staff work individually with students on a debate topic taken from the main topic. The main debate topic this summer is “The U.S. government should curtail its domestic surveillance.”

After a dinner break, campers interact with staff to review their work and prepare for team debate competition between the two student labs.

Boot campers get to show of their skills on the last two days in the Mumia Abu Jamal debate tournament. The tournament is open to the public.

The ECLI mirrors part of Coppin’s HBCU mission to integrate academic excellence with community engagement and enhancement. Collins and other faculty familiar with the program hope not only to build a debate team, but also to inject debate techniques into the academic curriculum.

Giving an insightful wink Collins said, “We hope to recruit many of these students to Coppin.”

PrevPreviousMeditations in Spring: On A Baltimore Uprising
NextWho’s Afraid of Common Sense?: A Grassroots Response to The Baltimore Sun on Police ReformNext