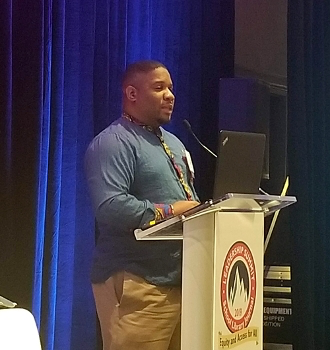 Dayvon Love came to the SLJ Leadership Summit to talk about systemic racism and the impact of white supremacy on society’s institutions, particularly education. But this wasn’t going to be the typical discussion of the issue.

“Too often, conversations about racism and white supremacy are shrouded in the concept [of] bigotry,” said Love, who is the director of public policy for Leaders of a Beautiful Struggle, a grassroots think tank with the goal of advancing the public policy interests of black people, particularly in Baltimore. “There’s actually a larger systemic conversation that needs to be had in understanding how the system of white supremacy shows up in the practices that we participate in that we think are rather mundane, but are actually very impactful.”

It is about how we have access to information and how we organize our society, he said.

Love began his keynote address by sharing a little bit about his past as a high school and collegiate policy debater, a research-heavy process that involves taking a full year to prepare. In college, he volunteered to help a high school team and during a discussion with the team’s coach one day, the coach told Love that Africans were navigating the Atlantic Ocean before Europeans. Love was skeptical.

“My initial thought was, ‘Why do we always have to have these conspiracy theories?” he said.

A few months later, he came across a YouTube video of a lecture called “They Came Before Columbus.” After that, he read They Came Before Columbus by Ivan Van Sertima. His research led him to the realization that, yes, Africans were navigating the Atlantic before Europeans. He also recognized that he had to question his original response to the information. Why had he been so dismissive?

“What I concluded was that I had never in all my formal education—even as a person who studies the importance of racism and how it impacts our society, and all the activism I was doing—I had never encountered peoples of African descent operating in arenas marked as high levels of civilization,” he said. “It impacted my ability to believe that that was possible.”

This idea of intellectual limitation was one of the points he wanted to make to the educators in the room. These limitations and the impulse to dismiss information that isn’t in the mainstream or European historiography is “part of the collective American consciousness,” he said. “And a part of what that impulse does is it keeps us away from information that helps us be able to develop solutions to human problems. It’s literally like a library locked in a secret room that people don’t believe exists.”

But why does this information matter and why is it important to have this discussion at all, Love asked before answering his own question. For people responsible for educating and socializing young people, particularly young black people, he said, the limitations of consciousness impact the way someone does their job—whether it’s as an educator or social worker or doctor.

There’s a “reservoir of intellectual and methodological materials” that educators can use, but they are out of the mainstream intellectual conversation, he said. Excluding that information perpetuates white supremacy in these service professions.

“Dayvon Love blew my mind this morning,” tweeted Brittany Tignor, a middle school librarian and one of many attendees who took to Twitter after Love’s address to share what they learned. “I realized that I don’t have the knowledge to be able to guide my students in learning about historical black figures that shaped the world. The gaps in my knowledge are passed to my students…help me fill the gaps!”

PrevPreviousPuerto Rico On The Map- An Interview With Rosa Clemente
NextVIDEO – Malcolm X Talk: Marijuana Legalization and Reparations (10.23.2019)Next