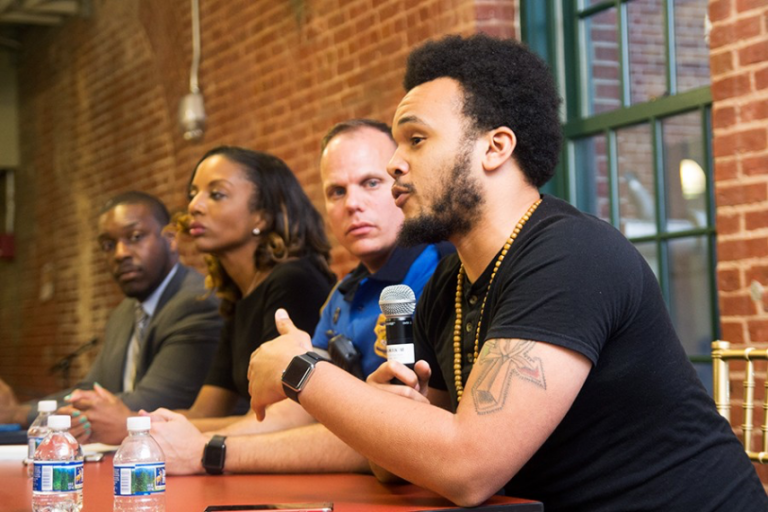 When Johns Hopkins researchers made an effort to hear from young people in Baltimore after the death of Freddie Gray, they found some sobering opinions of the city.

Of the 58 teenagers and young adults who offered candid interviews for the “Hearing Their Voices” project, not one saw their future in Baltimore City. They all hoped to move away one day.

“There was a sense of abandonment in their neighborhoods—a lack of safe public spaces and a lack of programs oriented to their lives and development,” Johns Hopkins sociologist Stefanie Deluca said at a forum Thursday night.

Those interviewed uniformly condemned the looting and violence that captured media attention two years ago this month, though they supported peaceful protest. Most disapproved of the city’s aggressive response to the unrest, including school closings and curfews.

The forum, however, offered glimpses of a culture change, with community organizers and policymakers pointing to new approaches for uplifting Baltimore’s youth. The 21st Centuries Cities Initiative at Johns Hopkins hosted the event to coincide with the release of the Hearing Their Voices report.

Baltimore City Council president Jack Young and his team described a new $12 million youth fund that will dole out grants to community organizations working directly with the city’s young people.

The task force guiding that fund has embraced a philosophy that “communities in Baltimore have the solutions to their own problems,” according to Adam Jackson, the group’s co-chair. He emphasized upending the conventional strategy of dictating community funding via “big-box, white-corporate institutions” that may not be focused on “helping black people find their own destinies.”

Young’s chief of staff, Lester Davis, said the task force brought in voices like Jackson—who heads the social progress think tank Leaders of a Beautiful Struggle—precisely because “‘we didn’t want to do business as usual.

Consultant Danielle Torain described a similar grassroots approach from the One Jobs for Baltimore initiative, for which she helped oversee the $5 million grant that came from the federal government in response to the April 2015 unrest after Gray’s death in police custody.

To determine how best to target that funding for workforce development, Torain and other project leaders first hosted a series of community conversations across Baltimore, which conveyed “the notion of a system being broken,” she said. In response, the team specifically required the new funding partnerships to “be inclusive of grassroots stakeholders,” Torain said.

Another panelist, Kirsten Allen, described how she got started organizing in her own East Baltimore neighborhood by transforming the local basketball court—”the pillar in our community,” she said—into a site for Sunday tournaments for both kids and adults.

Now, as head of Meraki Community Uplift, Allen is working on a race car-building program to get kids involved in engineering, and she’s also involved in urban gardening efforts.

With the latter, Allen said she learned the necessity of direct community input. From one garden yield, “I couldn’t even give away my zucchini and squash,” she recalled, so she geared her next plantings to vegetables neighbors specifically wanted, like broccoli and carrots.

“You can’t just think you can come into communities and tell them what they need,” Allen said.

The panel also included the perspective of a Baltimore police officer, Lt. Steven Olson, who patrols the Inner Harbor.

When he first started that job, Olson said he was warned: “Be careful, watch out for those kids.” But through his work with the Inner Harbor Project, which offers youth training opportunities and a “peace ambassador” program, Olson said he has seen “a true and open and honest” dialogue open up between young people and police.

“My crime started dropping,” Olson said of his patrol area, “and it continues to drop.”

Olson’s comments fell in line with conclusions included in the Hearing Their Voices report, which found that antagonism between youth and police in Baltimore “is more nuanced than portrayed in the media.” Rather than blanket distrust of cops, the Johns Hopkins researchers saw young people recognizing how actions of certain “bad apples” had sullied the force’s reputation.

The Hearing Their Voices project, run by the Poverty and Inequality Lab at Johns Hopkins, conducted in-depth interviews with youth in some of Baltimore’s most impoverished neighborhoods in the months following Gray’s death.

Those interviewed uniformly condemned the looting and violence that captured media attention two years ago this month, though they supported peaceful protest. Most disapproved of the city’s aggressive response to the unrest, including school closings and curfews, and were alarmed by the presence of the National Guard.

At last night’s forum, Deluca emphasized the report’s assessment that young people are “hungry for civic investment” in their neighborhoods in Baltimore.

Said Ben Seigel, executive director of the 21st Century Cities Initiative: “It appears that one of the legacies of Freddie Gray is reimagining who makes policy in Baltimore. With Hearing Their Voices, we tried to show that young people are very much becoming front-and-center actors and leaders in the policy making process, both through their lived experiences and through their ideas and energy. This is an exciting development for Baltimore, which could provide valuable lessons for other cities.”