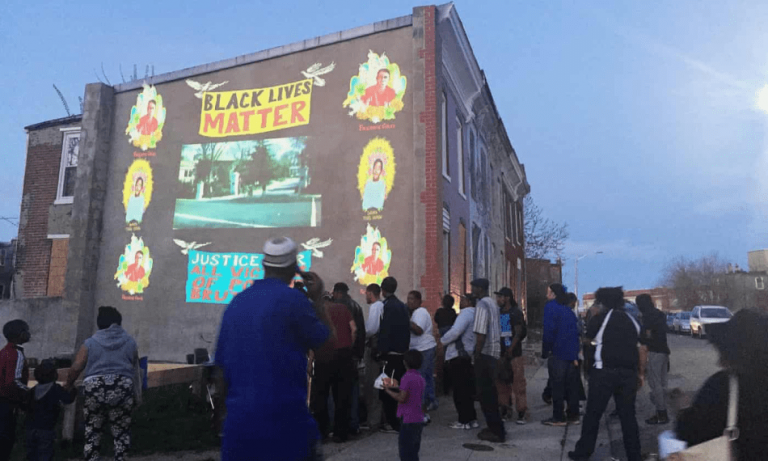 In the Baltimore neighborhood that became a nationwide symbol of racial inequality after protests turned to riot over Freddie Gray’s death, small signs of community resurgence have started to emerge.

Across the street from the spot Gray was arrested, a once-vacant row house has been painted with a mural of Harriet Tubman, garden beds have been raised out back, and desks and books populate the inside, in a new community center dubbed the Tubman House.

“I’m a resident of Gilmor and we need this,” said Janet Cottrell, describing the house as a “safe zone” in a neighborhood where homicides have only increased since Gray’s death.

But the city has nothing to do with the development. In fact, residents of the neighborhood have developed the center by illegally occupying the city-owned property slated for demolition – a detail that was not lost on the one mayoral candidate who visited the site for its opening ceremony.

“All the cameras are back in Baltimore and they’re going to want to know what we did differently in the last year in the neighborhood that was ground zero for everything,” said Baltimore city councilman Carl Stokes.

“The truth is we’ve done less than nothing – in terms of Baltimore’s government and larger nonprofits,” Stokes said.

The two-story Tubman House is one of the city’s 16,000 vacants. Just a block from Tubman House, another of those vacants collapsed in the wind a few days earlier, leaving a pile of rubble. It was one of five to fall that weekend. One fell on a Cadillac, crushing the man inside and killing him.

The median income in Gilmor Homes, the public housing complex just adjacent to Tubman House, is just $12,000, in a city where the unemployment rate for black men ages 25 to 54 is 41% and even higher for younger men.

To Lawrence Grandpre, an organizer with Leaders of a Beautiful Struggle, one of the groups that makes up the coalition along with Friend of a Friend and Communities United, the Tubman House points to other possibilities.

“We need to have alternatives for people to be able to see something beyond what they see on the corner,” Grandpre said. “And that only happens when you have an actual rooted presence on the space. So that’s why we took the step of taking this city-owned vacant and trying to reclaim it as Tubman House.”

There has been some larger-scale investment since the death of Gray, who sustained a fatal spine injury in the back of a police van, putting the neighborhood at the center of the nation’s discussion about police brutality and racial inequality last year.

Pastor Jamal Bryant’s mega-church has helped create a Freddie Gray Youth Empowerment Center in the Bolton Hill neighborhood and the Kids Safe Zone, only blocks from the epicenter of destruction at the corners of Pennsylvania and North, has provided opportunities for youth, including photography classes taught by Devin Allen, who came to prominence when one of his photographs of a protester running from police made it on the cover of Time magazine.

But in this neighborhood, where the homicide rates spiked after the death of Gray, a few blocks can be a long way for children to travel.

“We figure if we take this building over it will be a safe zone in the area, parents don’t have to worry about that child going around here and somebody shooting and their child getting killed,” said Cottrell. “So that’s the best part for us, is to have this place. The city’s not doing nothing with it. We’re doing something positive. So, I mean, why not?”

Baltimore housing responds that it is doing something with it: tearing it down.

“The City’s Department of Housing and Community Development (HCD) acquired the property and relocated the household in anticipation of the whole block demolition,” spokesperson Tania Baker wrote in an email. “It is not available for use or purchase. The strategic demolition on this block is part of a whole block solution under the Vacants to Value initiative to eliminate blight and revitalize Baltimore.”

Baker says the agency is meeting with the coalition to seek alternative solutions.

Stokes, who is polling at only 5%, said if he were to win the election – the Democratic primary, which has traditionally decided the mayor in this deeply blue city, is 26 April – he would give the house to the group outright.

“Dollar for dollar, they could do more [with a small investment in Tubman House] than others with $500m,” he said, referring to the controversial tax incentive being offered to sportswear giant Under Armour to redevelop a waterfront corporate campus across town.

PrevPreviousBaltimore’s Choice: Community Empowerment or the Police Monitoring Industry
NextReeling from a Murder Spike, Baltimore Grasps at a Gun BillNext