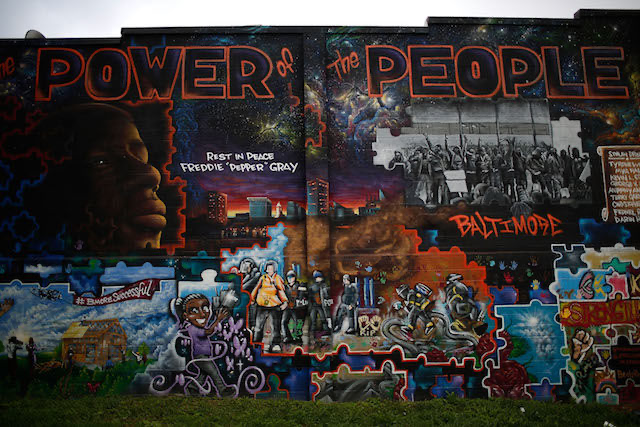 Three years after the police killing of Freddie Gray triggered an uprising in Baltimore, little has changed for Black residents who make up 63 percent of its population. Attempts to prosecute Gray’s killers famously failed. A 2017 consent decree, which the Baltimore Police Department (BPD) entered into after the U.S.Department of Justice found a pattern of civil rights violations against Blacks, is stalled. This year’s revelations about the corruption and violence of the BPD’s Gun Trace Task Force underscore more of the same.

There is, however, the potential for change in the form of the Baltimore Children &Youth Fund (BCYF). More than two decades in the making, the new $12 million fund provides local youth-focused groups with grants ranging from $500 to $500,000. BCYF is funded annually by 3 percent of the city’s property taxes. What’s innovative is how its principals structured it to ensure that small Black grassroots groups that usually go unfunded have a seat at the table.

Baltimore City Council President Bernard “Jack” Young had been introducing the idea of a dedicated youth fund since 1996. In 2016, city council unanimously approved a bill he’d introduced in 2015. But then-mayor Stephanie Rawlings-Blake vetoed it, claiming that earmarking discretionary funds limited mayoral decision-making power. With a newfound urgency forged by the Gray uprising, city council did something it hadn’t done since 1982: they overrode the mayor’s veto and brought an amendment to the city charter before voters. Over 80 percent voted yes.

“The unfortunate and untimely death of Freddie Gray provided the propellant to move this initiative forward,” says Lester Davis,Young’s deputy chief of staff charged with setting up the fund. “We realized we needed new ideas and we needed to support youth in a different way than we had in the past.”

The youth fund law didn’t specify how the money would be allocated or managed. Young appointed a 34-member taskforce of city agency heads, philanthropic leaders and grassroots activists to figure that out. Adam Jackson, the outspoken CEO of the Black “grassroots think tank” Leaders of a Beautiful Struggle(LBS) co-chaired the taskforce along with T. Rowe Price Foundation president John Brothers.Kim Trueheart,a Northwest Baltimore activist and city council meeting fixture who ran against Young in 2016, also served on it.

To that end, the taskforce did the most logical thing: “We went to communities and asked folks who run programs, parents, students, youth and young adults what they believed should be funded,” says Jackson. To structure the meetings, they borrowed from the idea of “people’s assemblies,” a radical form of community forums popularized by the late Jackson, Mississippi, mayor, Chokwe Lumumba.

“What’s different here is that you have a strong contingency of grassroots folks at the table, shaping policy and creating a unique apparatus around the youth fund and its implementation,” says David Miller, a taskforce member and the founder of the Black male achievement-focused Dare to Be King Project.“Because of the taskforce directives, Baltimore has an opportunity to create a new standard where the community shapes and determines how dollars come into our community and what types of programs get funded. This could not have happened without brash youth leadership that early on pushed the envelope that this effort has to be Black-led.”

OK, But Who Gets the Money?

To decide who would wade through what turned out to be $75 million worth of asks, the taskforce recruited a 24-person review panel using a public application process. According to the rules, the panel had to reflect the racial demographics of the city, hail from various communities in Baltimore City proper—and be made up of at least 40 percent of people under age 30. “Actual citizens [got] training and stipends for their work,” says Davis.

For prospective grantees, the fund held two information sessions that drew 250 people and “community capacity sessions” for groups that needed one-on-one help with the application process. “If we didn’t have a focus on engaging grassroots and capacity-building for those organizations, we’d miss the community we are trying to serve,” says Danielle Torain, a project director and senior consultant for Frontline Solutions, the organization that set up the sessions.

The process is not without its critics. In early June, Trueheart told Colorlines that the fund was moving too slow. “I am hopeful that we will get credible organizations with great programs and provide this desperately needed service. But two summers have gone by and not one penny has been distributed. Here we will go into another summer with money not being in the hands of organizations that serve our youth and children. Who knows what this summer will bring?” she said.

Diane Bell-McKoy, president of Associated Black Charities (ABC), the interim fiscal sponsor of the fund, attributed the pace to sorting out the details and developing firewalls. “This is $12 million dollars of public resources. Assurances had to be put in place to protect the public trust,” she says.

According to the BCYF website, the review panel submitted their recommendations on August 10.In addition to the potential the youth fund offers local institution-building is the way it pushes back against what critics call the nonprofit industrial complex. The result is an idea shift for activists and philanthropy alike.

Going Beyond the Status Quo

If you spend time in or around the nonprofit sector, what quickly becomes apparent is that many grassroots organizations will never get major funding. They are often deemed too small or can’t quantify their results. Or they are staffed by a few volunteers who have paying jobs and lack the time and knowhow to secure federal nonprofit classification or even a fiscal sponsor.

Then there’s the human interactions. Program officers and other gatekeepers have their own language and rituals that aren’t readily apparent to nonprofessional fundraisers. Of course, race matters. Like so many others, the philanthropic sector is overwhelmingly White and male. Boards and workers alike hold implicit biases based on race and other factors such as gender, class, sexuality, education level, immigration status, physical ability, age and incarceration history.

Critics within and outside of the philanthropic field also say that foundations place too much focus on funding individual programs instead of what it actually costs to run an effective organization. And there is recognition that most investment is going to larger organizations with multimillion-dollar budgets. One 2014 survey of arts funding in the Pittsburgh area concluded that smaller organizations received the least funding and are more likely to rely on sweat equity and volunteerism, which isn’t accounted for when funders gather metrics. According to the study, the eight largest organizations had a combined budget of $130 million versus the 160 smallest organizations with a combined budget of $40 million.

City council aide Davis says city, state and federal governments reproduce these dynamics when they work with large, mainstream (and often White-led) organizations with whom they have a long history. “Government is not in the business of risk-taking,” he explains. “The way these things usually work is you go with the tried and true institutions and organizations who have always had a seat at the table.”

Adds LBF’s Jackson: “A grandmother who has been living in her community for 30 plus years and works with the youth has more knowledge and relationships with the people there. Just because she doesn’t have a 501(c)(3) status organization or doesn’t have all the trimmings of the nonprofit sector doesn’t mean she isn’t doing effective work. But it does mean that she could be me more effective if she did.”

On May 10, people from all walks of life huddled in a University of Baltimore auditorium to kick off a Baltimore CeaseFire weekend. In attendance was Marlaa Reid, longtime first lady of Baltimore’s AME Bethel Church; Rhanda Dormeus, mother of the late Korryn Gaines; State Delegate Brooke Lierman; Tawanda Jones, sister of police killing victim Tyrone West. A loquacious audience member in his early 50s waxed poetic about his life behind bars.

At the start of the event, the host shouted out several activists and organizations. A mention of LBS, a group with pan-African nationalist political leanings, met with a mixture of applause and wide-eyed stares.

Nearly everyone Colorlines interviewed for this piece described LBS as essential to shifting the dynamic for what the youth fund could mean for the city. “They were crucial to having an honest conversation about this work, shedding light on inequalities of the current process and how to ensure those inequalities are eliminated in this new one,” says activist and criticTrueheart.

Miller describes the organization as “young and brash” enough to “galvanize groups who have lost faith in the traditional process.” “LBS is calling out racism and systemic issues,” he says. “Their boldness frightens people, especially establishment Black folks who would rather go along to get along.”

Dayvon Love, LBS co-founder and director of research and public policy, demonstrates that outspokenness in our interview: “Our critique of the nonprofit sector is basically that [it] has benefited politically and financially as a result of the suffering of Black people,” he says. “The uprising created space so that our advocacy around the youth fund had a whole lot more stamina than it would have previously. We saw the trajectory of it and what we saw was that there were White corporate nonprofit entities salivating to get their hands on being the operators of the fund.”

Continues Love: “In the way that we approach the youth fund, we are trying to flip the dynamics around structural racism. A lot of people who work at these foundations and mainstream nonprofits will admit that there are structural impediments, but they aren’t willing to give up any serious amount of power or decision-making. We had to put in the forefront of the [dialogue] that there are institutions profiting off of the suffering of our people, those who are working every day to undermine grassroots organizations in an effort to benefit and enrich themselves.”

The Baltimore youth fund approach is an attempt to create an alternative.

“This fund is just one example of how we’re going to change the fundamental economic development practices and investment practices both in the nonprofit philanthropic sector and the corporate sector in this city to transform the conditions of Black folks,” declares Love. “We see this as driving the public policy and economic development conversation in the direction of Black independence and autonomy. It’s long overdue.”