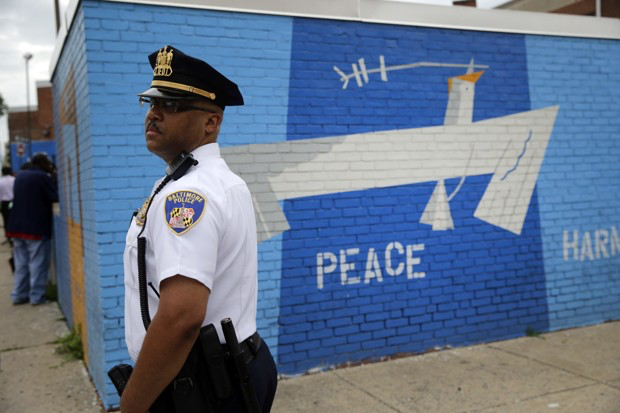 Reeling from a Murder Spike, Baltimore Grasps at a Gun Bill

Across the country—from Louisiana to Iowa to Massachusetts—so-called “mandatory minimum” sentencing is increasingly out of favor. These are laws that require certain penalties for people convicted of specific drug or firearm offenses. A powerful bipartisan consensus has emerged around the idea that mandatory minimums are ineffective (and expensive) deterrents, as well as racially discriminatory and unlikely to reduce recidivism.

Yet this month in Baltimore, the city council voted 8-7 in favor of establishing a new mandatory minimum penalty for individuals caught carrying an illegal gun. The proposed legislation originally would have imposed a one-year jail sentence on first-time offenders caught carrying a gun within 100 yards of places like churches, schools, and parks. After public protest, the bill was weakened to add just a $1,000 fine to existing state law, which already imposes a one-year minimum sentence on second-time offenders.

The legislation (in both its original and final form) was backed by the city’s police commissioner, Kevin Davis, and Mayor Catherine Pugh. Baltimore State’s Attorney Marilyn Mosby released a statement saying “I am committed to holding criminals who wreak havoc in our city accountable for their actions and support all efforts intended to strengthen gun control,” but stopped short of stating that she either supports or opposes the specific bill. All three advocated unsuccessfully over the last two years for new statewide mandatory minimums.*

In part, the bill’s success reflects the pressure that the city’s legislators are under to do something—anything—to curb the violence. As the Brennan Center for Justice has reported, violent crime is at historic lows nationally, but no such decline can be found in Baltimore: As of this writing, 253people have been murdered since January. In 2015, Baltimore’s violent crime rate was more than four times the national average, and its murder rate was more than 11 times the national average. Right now, Baltimore’s murder toll exceeds that of New York City, which has about ten times the population.

“I by no means think this is a comprehensive solution to gun violence,” says city councilman John Bullock, widely seen as the deciding vote. He recognized the public’s concern with mandatory minimum sentencing, which is why he introducedthe amendments to weaken it from its original form. Councilman Eric Costello, who voted for the bill and has saidthe amended version is “not as strong” as he would have liked, declined a request for comment; Council President Jack Young, who also backed both versions, did not return requests for comment.

Critics of the bill are frustrated with the city council’s rationale to pass a measure that has no evidence to support it.“The easiest thing for elected officials to do is pass a new criminal law, make sentences longer, add mandatory minimums,” says Molly Gill, vice president of policy for Families Against Mandatory Minimums. “That may give them a feeling of accomplishment, but it’s not going to solve these very complicated problems of why we have violence, gun crimes, and murders.”Mark Kleiman, an NYU public policy professor and an expert on drug and criminal justice issues, calls the $1,000 fine “gibberish.” Quoting the infamous politician syllogism, he says, “We must do something, this is something, therefore we must do it.”Among those who testified against the mandatory minimum bill this past summer was Dayvon Love, director of public policy for the Baltimore nonprofit Leaders of a Beautiful Struggle. He points to the support from the Greater Baltimore Committee, a business advocacy group, as key to the bill’s success. “I suspect they are trying to attract more wealthy, white people to invest and come to Baltimore, and the murder rate is merely an impediment to them doing business,” Love says. “They could care less if this bill would have the possibility of destroying the lives of black people who become more prone to violent activity because they were sucked into the criminal justice system.”Illegal gun possession is highly correlated with the future risk of committing a murder, and Daniel Webster, director of the Johns Hopkins Center for Gun Policy and Research, does think illegal gun possession is a serious crime and is a major contributor to Baltimore’s homicide rate. Ultimately, though, he did not support the measure passed by the city council, principally because he says there’s no evidence that it would be effective. “It’s rather surprising that there is no solid research that answers the question of what happens if you adopt a mandatory minimum for illegal gun possession,” he says. Most existing research has focused on drug-related arrests.

Webster thinks the city does need to have better consequences for illegal gun possession, but that the consequences should be driven by better arrest and prosecution, rather than at the tail end of the sentencing process. In Baltimore only about 40 percent of arrests for illegal gun possession end up in a conviction or guilty plea. A Baltimore Sun analysis found that about one-quarter of cases are dropped even before defendants go to trial. And though the Baltimore Police Department has improved its homicide clearance rate in 2017 compared to recent years, Webster notes that the past two years have led to many unsolved murders and nonfatal shootings. “When shooters are not locked up, they are emboldened and ripe for being shot themselves,” he testified recently in Annapolis.

Proponents of mandatory-minimum sentencing have taken to placing blame on Baltimore city judges. “At the end of the day, we don’t impose sentences and don’t implement bails,” State’s Attorney Mosby said last year. “We can make a recommendation. But it’s not on us.” In an op-ed that counseled against “reflexively recycling the regressive strategies of the 1980s,” former deputy attorney general of Maryland Thiru Vignarajah noted that leaders who blame the courts are essentially echoing tactics deployed by President Donald Trump, who has repeatedly tried to discredit the judiciary, even threatening judges at times.

“Mandatory minimum sentences are shortcuts we don’t need as prosecutors,” says Vignarajah. “We should be able to walk into a courtroom and explain why a sentence is appropriate and have faith in our judges to determine where a specific defendant falls on the spectrum between a violent repeat criminal and someone who needs a second chance. Mandatory minimums are unduly rigid and strip away discretion that judges need.”

Todd Oppenheim, a public defender in Baltimore who opposes the mandatory minimum measure, says that in his experience most defendants who would be affected by the bill are young and/or first-time offenders, not the “repeat violent offenders” who tend to dominant the debate. “The possession of a handgun is considered a violent offense, but I don’t see it as one because I know the circumstances under which my clients come into possession of it,” he says. He also points out that, “like drugs, a lot of my clients don’t understand that you can possess something without it being on your body.”

The Baltimore Police Department, by contrast, emphasizesthat in the past 18 months, 60 percent of the 605 convicted gun offenders had had more than half their sentence suspended by a judge, and more than 100 people were arrested on handgun charges at least twice. The mandatory minimum “isn’t about mass incarceration or locking up more people,” Commissioner Davis testified in July. “It’s about holding the right people accountable.”

Still, there are alternative ideas.

With a new grant from Bloomberg Philanthropies, Johns Hopkins’s Daniel Webster is currently working with the state’s attorney’s office and the police department to develop new training protocols that will help strengthen the prosecution of illegal firearms. “First we have to have good policing that is done in a way to identify illegal gun possession without doing illegal searches and unconstitutional policing,” he says. “And then we need to have solid evidence that is useable to bring convictions.”

Dayvon Love emphasizes investments in community-based solutions, “where violence is prevented by people who are in closest proximity to the violence.” Leaders of a Beautiful Struggle’s recommendations include more funding for Safe Streets Baltimore, which uses a public-health strategy of employing ex-offenders as to mediate neighborhood disputes. In studies, the model has shown to be effective, but Baltimore’s program has drawn controversy in the past due to allegations of criminal activity by program workers. Love also cites efforts like the Baltimore Ceasefire movement and local violence prevention centers.

Gill, of Families Against Mandatory Minimums, points outthat the number of full-time law enforcement officers per 1,000 Baltimore residents fell 14 percent between 2003 and 2015, and even more in 2016. “Mandatory minimums are incredibly expensive—prison is not cheap,” she says. “It might be a better investment to put more squad cars on street corners than to jack up sentences.”

In other words, the answer doesn’t have to be a year in jail, but the assumption that there will be some consequence to breaking the law. “Right now a lot of people figure I’ll just take my chances,” says Webster.

Kleiman of NYU thinks policymakers should be considering things like 9 p.m. curfews. “It’s the perfect sanction in the sense that it’s salient, it’s aversive, and it doesn’t interfere with family duties and employment,” he says.

Ironically, on October 1, a major new statewide law—the Justice Reinvestment Act—goes into effect, and it will significantly reduce mandatory minimum sentences for non-violent offenders throughout Maryland. The law, which was signed in May of 2016, was widely seen as the broadest criminal justice legislation to pass in decades, representing a major shift away from “War on Drugs”-era policies.

“There’s a progressive movement to move away from incarceration for nonviolent offenses,” says Oppenheim. “But when it comes to violent offenses—and the definition of violence I think is subjective—leaders still harbor the old-school mentality. They don’t have any real ideas, and it helps them get elected.”