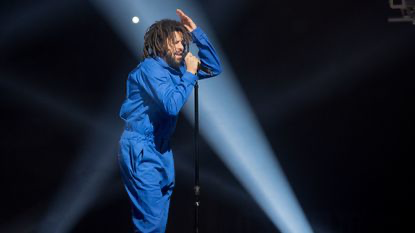 Ethan McLeod | February 5, 2018
Rap star J. Cole is pitching in with activist athlete Colin Kaepernick to help Baltimore grassroots group Leaders of a Beautiful Struggle, pledging $10,000 to pair with a 2017 donation from the former NFL quarterback.

Kaepernick announced his buddy’s donation via Twitter Friday, giving a shout out to LBS as a group aiming to “radically change the discourse around politics by interjecting the community voice into the political conversation.”

Adam Jackson, CEO of Leaders of a Beautiful Struggle, expressed his gratitude to Cole and Kaepernick on Twitter.

“Merely having people like them that are willing to financially support us, it goes a long way to support transforming the conditions of black people in a city like Baltimore,” Jackson said in an interview Monday.

Jackson said the $10,000 will go toward Leaders of a Beautiful Struggle’s advocacy work, which includes fighting several crime bills proposed by the Hogan administration that would impose mandatory minimum sentences for gun offenders, charge juveniles as adults if they’re involved in gang activity and limit parole eligibility for violent offenders. He said each proposal would feed the prison industrial complex and stand to disproportionately punish black Marylanders.

Once upon a time, Kaepernick was best known for his stellar play for the San Francisco 49ers. That all changed during the NFL preseason in August 2016, when cameras noticed him sitting for the “Star-Spangled Banner” before a game. Kaepernick explained he was protesting police oppression toward people of color, and went all in on that message by kneeling during the anthem for the final game of the preseason.

The rest is history; NFL teams have since been reluctant to sign Kaepernick (though the Ravens did consider it). Kaepernick has taken that in stride, opting instead to focus his energies in part on fundraising, which he kicked off by pledging $1 million of his 2016 jersey sales–which skyrocketed after his acts of protest–to “organizations working in oppressed communities.”

He came through for LBS in March 2017, donating $25,000 for a summer camp for high schoolers centered on “debate training for public policy,” according to his website.

Jackson noted Kaepernick didn’t seek publicity for the March 2017 donation, which he said should be how other celebrities approach donating to causes. He learned of the donation only when he received a phone call from Kaepernick’s manager last spring.

“I thought it was a prank call,” he said.

Cole’s donation actually came a couple weeks after Kaepernick hit his mark, but the former quarterback has continued soliciting help from celebs as an “encore.”