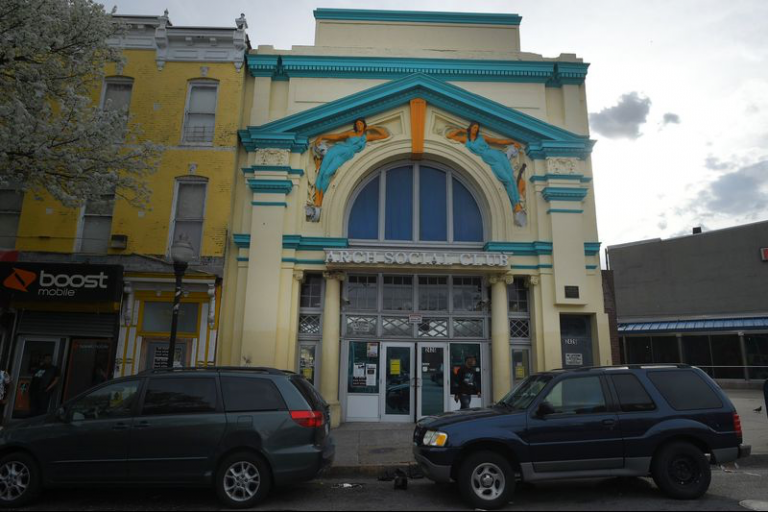 Community leaders are hoping to revitalize the area near Pennsylvania and North Avenues into an arts district. (Barbara Haddock Taylor, Baltimore Sun video)

In the wake of Freddie Gray’s death in 2015, as racial tensions flared across the country, dark clouds of smoke engulfed the CVS Pharmacy on the corner of Pennsylvania and North avenues in West Baltimore.

Now rebuilt, the corner property shows no visible trace of the insurrection. But on a warm Friday afternoon in mid-March, Councilman Leon Pinkett eyed the building with some consternation.

“We missed an opportunity with the rebuilding of the CVS,” the Democratic councilman from Baltimore’s seventh district said. “There could have been senior housing added on top.”

The block is just one of several from Fulton Avenue to Dolphin Street that a coalition of lawmakers, neighborhood associations and nonprofit groups are seeking to rehabilitate and incorporate into a thriving arts and entertainment district — akin to Memphis’ Beale Street. Seeking a mix of private and public funding, the group envisions recreating a strip that hearkens back to Pennsylvania Avenue’s rich history as a cultural hub for Baltimore’s black community during the segregation era.

The cohort describes their vision as a full-scale “Renaissance” that would transform the district from a heavily concentrated area of crime and blight into a prime tourist attraction and destination for black-owned businesses.

Similar proposals have come and gone before, backed by previous mayors, local officials and individual nonprofits and neighborhood leaders. But with a state designation as an arts and entertainment district and several invested groups collaborating under the direction of Baltimore’s Leaders of a Beautiful Struggle, Pinkett and the rest of the cohort said they think this effort will bear tangible results.

“It wasn’t successful in the past, but it won’t fail this time,” the first-term councilman said. “We can’t just hang a banner up and make it an arts district — it’s about having a vision for the future.”

From the 1920s through the late 1950s, “The Avenue” housed theaters, hotels, live music venues, fine eateries and businesses that catered to the city’s black community. But racially-mixed crowds packed in for Cab Calloway, Billie Holiday, Dizzie Gillespie, Nat King Cole, Redd Foxx, Louis Armstrong, Duke Ellington and myriad other black entertainers as they performed at the famed Royal Theatre, which served as “one of the major stops on the black entertainment circuit,” according to The Baltimore Sun in 1975.

Barred from most other venues—not just in the state but also in the country—many of the nation’s top black performers at the time either got their start or found adoring crowds at the Royal Theatre. Considered the crown jewel of the district, it was demolished in 1971.

The Penn Hotel, the first black-owned hotel in Baltimore, proved another popular destination along The Avenue. Inside the hotel, visitors flocked to the lobby to catch glimpses of celebrities like Pearl Bailey, Count Bassie and Ellington, who frequented the in-house restaurant, according to The Sun.

Other establishments on Pennsylvania Avenue like Gamby’s, The Sphinx Club, Ike Dixon’s Comedy Club and Club Casino enjoyed steady business through the district’s heyday. Institutions like the still-standing Arch Social Club — regarded as one of the oldest African American social clubs in the country — and businesses like the Ideal Savings and Loan provided the corridor with additional depth. Residential homes, schools and churches testified to the neighborhood’s stability.

But crowds quieted as televisions evolved into mainstream household items and as statewide desegregation in the 1960s minimized the district’s unique appeal for black consumers. By 1975, The Sun reported that Pennsylvania Avenue had fallen “into a state of decay and disrepair,” and soon “became a focal point for narcotics traffic in the city.”

James Hamlin, a longtime leader and advocate for Pennsylvania Avenue’s redevelopment, said he laments the fact that many young people refer to this section of West Baltimore only in the context of Freddie Gray and HBO’s “The Wire.”

“They don’t know it’s this historic community,” Hamlin said, adding that his Avenue Bakery, adorned with a visual timeline, jukebox and external murals attracts visitors from all over the country who want to learn and reminisce about The Avenue.

Hamlin, who grew up in the area, left retirement to open the bakery and take on the role as president and CEO of the Royal Theater and Community Heritage Corporation, a nonprofit dedicated to rehabilitating the district. He also served as president of the Pennsylvania Avenue Redevelopment Collaborative, a task force that helped create the Pennsylvania Avenue Heritage trail, along which visitors can explore or participate in guided tours.

Abandoned, boarded-up homes largely dominate today’s Pennsylvania Avenue. Sidewalk graffiti on street corners demarcate “no shoot” zones. Colorful murals along the sides of many buildings remind passersby of its vibrant past, though the impact of those beautification efforts remains unclear.

Pinkett said while some short-term fixes like facade improvements and added street lighting do matter and will be implemented on The Avenue, a long-term reshaping of the district’s commercial landscape will prove even more influential in its re-branding effort.

“Even with the negativity and illegal activity, it’s probably one of the most accessible-by-transit hubs in the state,” he said. “As you can see, there are plenty of people, but what are they coming here for?”

Pinkett said allocating the right mix of businesses — including restaurants, professional services and entertainment venues — and opening up ownership opportunities for minorities will help combat the threat of gentrifying the area.

“What we don’t want is displacement, or the same types of businesses over and over,” he said. “If we keep ownership in the hands of blacks, that will dictate its trajectory.”

“The idea is that we’re going to provide new economic opportunities and employment options for residents in the area,” added Eric Costello, a councilman representing much of the district. “It’s not a problem we can just throw money at.”

Annie Hall, president of the Penn North Community Association who first moved to West Baltimore in 1952, said residents want “a nice, sit-down restaurant” and fewer carryout counters. And Marion Blackwell, manager of the Historic Pennsylvania Avenue Main Street nonprofit, said past survey results indicate the need for more fresh produce, more seafood and a resurgence of the entertainment scene that once packed the theaters and dance halls.

“They miss the music and the vibrancy,” she said. “There’s a passion for Pennsylvania Avenue like none other. Folks are ready for a change.”

“Lady” Brion Gill, a spoken word artist and cultural curator of Baltimore’s Leaders of a Beautiful Struggle — the engine primarily spearheading the administrative and organizational duties behind the initiative — said she’d like to see a commemorative museum and more entertainment and arts venues specifically open for black creatives.

“At least for the last three or four decades, there have been people trying to create the district along Pennsylvania Avenue,” she said. “We’re making sure folks aren’t working in silos, making sure all the West Baltimore folks are involved.”

But Pinkett said a redevelopment effort of this caliber could take years.

“We can’t bank on one big development or initiative,” he said. “It’s about making certain blacks can benefit from the renaissance, in the context of establishing development and equity.”

Last month, Pinkett and Costello sponsored a resolution in the Baltimore City Council to formally designate Pennsylvania Avenue as an arts and entertainment district. A required component of the application process for state recognition as an arts and entertainment district includes formal acknowledgement from the county in which it resides, usually in the form of a resolution. The Baltimore City Council adopted the resolution March 18.

With the state’s designation, Pennsylvania Avenue could receive property tax credits for new construction or renovation of spaces where artisans could live, work or perform; an income tax subtraction for artistic work produced and sold within the district; and other tax exemptions for artists who reside there.

“This is somewhere where people can celebrate being black and not be ashamed,” Pinkett said. “Especially in this corridor, we want to it to stay black.”

In addition to the state’s help, the district can also receive financial assistance and benefits from a number of local funding sources. The district resides within a “Opportunity Zone,” areas in the state included in a federal tax-incentive program designed to direct investment into struggling communities, and could also qualify for benefits through the Maryland Department of Commerce’s “Enterprise Zone” program which provides property and income tax credits for businesses located in certain jurisdictions. The district could also qualify for tax credits through the Commission for Historical and Architectural Preservation and various incentives from neighborhood associations, the Maryland Department of Planning and the city of Baltimore.

Costello said cobbling together as many economic incentives as possible for the district would make investment in it more attractive.

“Folks who have the opportunity to invest, who wouldn’t normally, would invest there based on the credits they get with respect to capital gain,” he said. “We need to provide as many incentives as possible to drive that private investment.”

Traces of Pennsylvania Avenue’s rich past act as visceral anchors of its present state. Pinkett said CHAP has helped the coalition reclaim ownership of some of the district’s anchors, including The Sphinx Club; A few blocks away, the brightly-decorated Harris Marcus Center houses Jubilee Arts, which provides art classes and cultural community programs to residents of the surrounding neighborhoods through a partnership with the Maryland Institute College of Art and the Baltimore Office of Promotion and the Arts; And the Avenue Market remains open with a couple of tenants — though Pinkett envisions it as a potential incubator for small business owners to develop their skills.

“The challenge is, reduced rent is better than leaving it vacant. Isn’t it better to give the space away to help businesses grow than not help anybody?” he said.

Pinkett said it’s important to judge the worth of Pennsylvania Avenue in the context of what it can become — and equally as important to lobby every eligible entity of the state to contribute.

“It’s not a fantasy,” he said. “We have the vision. We just need the resources.”

But even without the state’s backing, members of the group said they’ll continue moving forward with their mission: A task this expansive, this nuanced, can’t afford to wait.

PrevPreviousWomanism… A Black Feminism For Us, By Us
NextVIDEO – Malcolm X Talk: Navigating Politics as Millennial Women (3.29.2019)Next