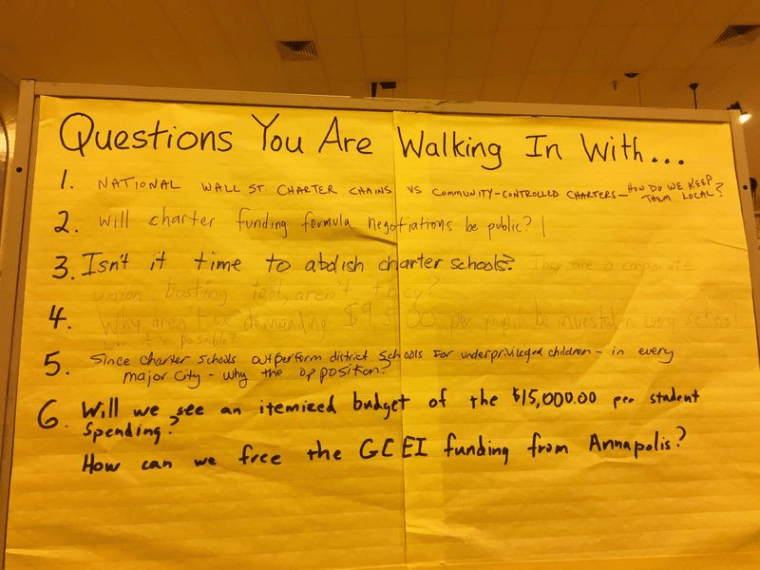 Gathered last night at Roland Park Elementary/Middle School, parents, teachers, school administrators, and community members came out to discuss charter schools and the upcoming legislative season in Annapolis. The event was hosted by the Teachers’ Democracy Project (TDP), a local group that engages teachers in public policy issues and develops social justice curricula; it pitched it as an opportunity for “open, public, civil, informed discussion” about charters and their future in Maryland.Helen Atkinson, the executive director of TDP, opened the night by telling the audience that they had planned this event five months ago, well before the lawsuits and charter funding battles that came to a head in September. Nonetheless, Atkinson said, the event would remain primarily focused on the legislative issues at stake in 2016. Though the event was mostly respectful—save for a few heated moments—it became clear very quickly that people were more interested in expressing their feelings about charter issues in Baltimore than exploring what Hogan and his allies might be up to in a few months.To begin the event, TDP screened a short documentary the group created called “Charters: the Illusion of Change.” The film featured local community members, including Atkinson, Jessica Shiller, an urban education professor at Towson; Matt Hornbeck, a principal at Hampstead Hill Academy charter school; Kim Truehart, a longtime citizen activist; Kris Sieloff, a teacher at City Neighbors High School; and Ben Dalbey, a city schools parent. It also featured two national education policy experts: Julian Vasquez Heilig, who blogs at Cloaking Inequality, and Pedro Noguera, a professor at NYU. Both have reputations for speaking out against the education reform movement.Overall, the film pushed themes that were fairly critical of charters, yet some speakers also said they understood why charters have proliferated and gained popularity, given the district’s portfolio of underperforming schools. “But simply saying ‘put more charters in’ is overly simplistic,” said Hornbeck in the film. “It’s searching for a silver bullet, it’s not a solution.” Most of the speakers seemed to agree that rallying for more funding for all schools would be a better strategy than expanding choice for just some students.

“What charters have succeeded in doing is bringing more white and middle-class families into the school system,” said Atkinson in the film. “The problem is when you start giving those schools more privileges based on their successes.”Sieloff described her experience working at a non-unionized charter school in Chicago. “It was possible to work employees to death, which led to high turnover rates, which created destabilization,” she said. Seiloff argued that the current law in Maryland, which ensures union protection, is better for teachers and for schools.Following the film, Erica L. Green, an education reporter for The Sun, solicited reactions from the audience—which varied considerably.Cindy Walsh, a representative from Citizens’ Oversight Maryland, said she’d like to “make it clear” that various parts of Maryland think about charter schools differently. Baltimore, Walsh said, is “heavily controlled by Johns Hopkins, very Bloomberg oriented, very connected to New York,” meaning that “they will definitely want national charter chains” in the city. Others, pointing to Baltimore’s local grassroots charter sector, disagreed with Walsh’s conclusions.

Dayvon Love, a former charter school teacher, graduate of Forest Park High School, and current director of research and public policy for Leaders of a Beautiful Struggle, spoke about how racism and white supremacy are too often absent from these public education discussions.

“Many of the communities in Baltimore that are most directly affected by mass incarceration and poverty are seen as pathological,” said Love. “They’re not seen as having the ability to govern themselves.” He noted that both traditional schools and charters are full of “benevolent saviors” that seek to rescue black communities. “If charters proliferate in a way that’s not about directly giving [those in the community] power,” Love said, “then public education and charter schools can be a window to further gentrification and undermine the quality of life for black students.”

Next, Eric Rice, a professor at the Johns Hopkins School of Education and a former charter operator, offered some contextual background on charter schools and on Maryland’s unique charter law. Alison Perkins-Cohen, a district official and a former charter operator, followed up by giving a presentation on how the school district thinks about its charter funding formula. The next portion of the program involved Green reading aloud statements, and inviting people who agreed, disagreed, or felt somewhat ambivalent to share why they felt the way they did. Statements included “charters improve the public education system, and not just for students who attend them and the teachers who teach in them” and “our state has one of the best charter laws in the country because it limits charter autonomy, keeps charters under control of the local system, and retains teachers with the AFT and the NEA.”Jason Botel, the executive director of MarylandCAN, a pro-charter advocacy organization, said he feels charters “are one small step in the path to dismantle institutional racism” given that big urban school districts have been designed to control and exploit African-Americans.“That’s so cynical and disgusting!” a parent in the back of the room shouted, who said charters are there to attract white students, not really to serve poor black kids.Love, following up on this exchange, added that he worries charters are “being operationalized” in a way that creates a parallel segregated school system “where white parents are trying to put their children in schools to avoid being around black students.” It’s not so much a question of whether charters are good or bad, he said, but whether they are serving as opportunities “for other people to make decisions about our communities.”The room spent a considerable amount of time debating the demographics of students who attend charter schools, and discussing details related to the district’s funding formula. The need for greater transparency was certainly a repeated theme. “Alison [Perkins-Cohen] was saying, ‘This costs this [much]’,” said David Stone, a former Baltimore City school board commissioner. “But that’s not true, that’s just what the district spends on it.”

Questions of race were sharp, and present, throughout the night. Are charters there to save black kids from failing traditional schools? Are we at risk of losing more black educators? Are charters primarily meant to lure more white families into Baltimore? Would deregulation help or hurt black communities?George Mitchell, a leader in the fight to save Langston Hughes Elementary, spoke soberly to the predominately white audience. “Nintey-five percent of you don’t look like me,” he said. “We closed down that school and what do you think is going to happen to those kids?” He pointed to the injustice of shutting down a successful, small neighborhood school, while charters with even smaller student populations were allowed to stay open.

“We white people think we’re very precious, don’t we?” Dalbey asked the crowd. “That whole thing about how we’ll leave the city, I wonder how much the city actually needs us, and for real, we’re not magical.”

Though the conversation hardly touched on Hogan’s upcoming charter plans, a general consensus seemed to emerge that uniting together to prevent further education cuts is an absolute priority. “On average, generally speaking, all of our schools are underfunded,” said Bebe Verdery, the director of the ACLU of Maryland’s Education Reform Project. “That’s why so many of us to go to Annapolis and we invite you to join us.”