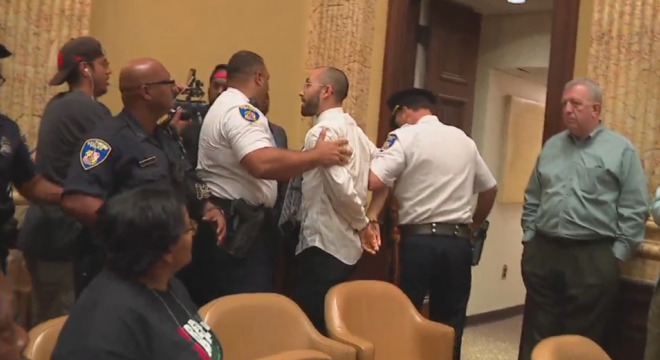 A controversial proposed Baltimore gun law, which would enforce a mandatory one-year sentence on anyone illegally carrying a gun in many sections of the city, was watered down significantly in a Baltimore City Council committee July 25.

After a contentious hearing in the council chamber, where protesters opposed to the mandatory minimum gun legislation were arrested by Baltimore police, the Judiciary and Legislative Investigations Committee voted 5-2 to send the amended bill to the full council. The amended legislation, introduced by Councilman John Bullock (D-9th) would impose the one-year mandatory sentence only on individuals committing a second gun possession offense or carrying a gun in commission of a crime against a person or property. Current Maryland law already applies a 1-year mandatory minimum on a second handgun possession offense, and already requires a 5-year mandatory sentence for using a gun while committing a violent crime or dealing drugs, effectively neutralizing the proposed stripped down legislation being considered by the council.

“Basically, the amendment that came out and it was voted on favorably…makes this bill the status quo,” said Lawrence Grandpre, director of Research for Leaders of a Beautiful Struggle, a Baltimore grassroots think tank.  “The fact that they kept debating it, the fact that they kept talking about it like it was the same (original) bill, leads me to believe that…this amendment came from a fear that this was a political hot button issue, which clearly it was and they were trying to soften the blow,” Grandpre added.

They’re not doing anything substantive…anymore because of this amendment. But, they want the PR value of continuing to talk about it and I really think that’s really disingenuous and somewhat disrespectful to the citizens of Baltimore. We know when something is getting passed just for the sake of saying, `We passed something.’”

Prior to the discussion and vote on the amended legislation, a chaotic hearing that lasted more than six hours, led to repeated clashes in the council chambers. Grandpre referred to the police arrests of anti-mandatory minimum protesters as “a militarized response.” According to police, a 27-year old and a 29-year old man were both arrested during the hearing and one of them was taken to a hospital complaining of chest pains. Police did not release the names of the two men arrested.

“This ordinance doesn’t lead us down a path to justice, it leads down the path to oppression,” testified Baltimore defense attorney J. Wyndal Gordon. During his testimony, Gordon a successful defense attorney, talked about the “costs” of practices that lead to mass incarceration, before commenting on the challenges inherent in enforcing the proposed law. “You’re going to give this authority to a police department that’s been corrupt for a very long time. They’ve been charged and convicted of theft, racketeering, overtime fraud, robbery, false reports,…” Gordon said, before being interrupted by Councilman Eric Costello, chairman of the Judiciary and Legislative Investigations Committee, and one of the strongest proponents of the mandatory minimum legislation.

Councilman Brandon Scott (D-2nd), was succinct in his assessment of the proposed gun legislation. “Mandatory minimums don’t work,” Scott said before being interrupted by applause from the council gallery. “In my humble opinion, this piece of legislation is a direct diversion away from the real issue and the real issue is that…the only way we can deal with violence in Baltimore is to have a comprehensive strategy that is not the burden of the police commissioner or the police department, but of all city agencies. And without that we’re going to continue to have this conversation.”

“The personal and collective safety of the faculty, of our students and the staff who work and study at Morgan is our number one priority and it is critical to the university and the sanctity of our mission…as an anchor urban university,” Dr. Wilson said.

PrevPreviousMandatory minimums for illegal handguns will NOT stop murders in Baltimore
NextBaltimore’s Choice: Community Empowerment or the Police Monitoring IndustryNext