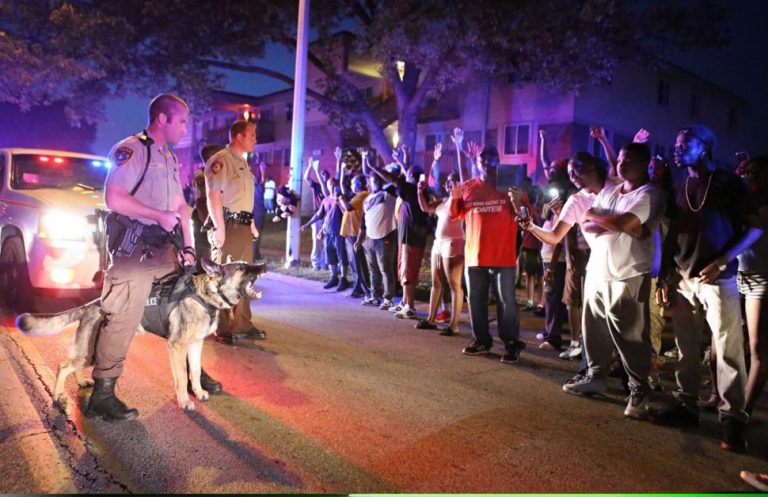 Mike Brown, Ferguson and the Criminalization of Black sentience

A lot has been said about the situation in Ferguson, MO. A huge reason why we have taken so long to add to the discussion is that we know that this ‘news’ story isn’t news. Police brutality is not new. According to the Malcolm X Grassroots Movement, a Black person is killed by some form of law enforcement once every 28 hours. There are Mike Browns all over this country who will not have their stories told. And unfortunately even when stories are told, as in the case of Mike Brown, we see the demonization of Black youth and the reproduction of the criminal narrative which is necessary to justify the killing of Black people.  I worry that the spectacle of Black death will overtake the truly important element of the whole story. That element is that a precious Black child lost his life at the hands of the state.

My fear is that the national spectacle of Mike Brown’s death will reproduce narratives, representations and debates around Black suffering that all tend to obscure important conversations on institution building and policy change.   The most tragic part is that white controlled and dominated media will profit from the boost in ratings for simply peddling Black suffering.  I am not saying that the issue shouldn’t get media attention. But when we watch the media coverage we see that even honest and well intentioned reporters tend to focus on the spectacle of violence instead of turning their lens on to how we build community.  For these reasons we have tried not to participate in much of the popular discourse around the subject of Mike Brown’s death.

But there is something very particular that I would like to call attention to that I think is essential for understanding of why the phenomenon of police brutality is so crucial to address.

The criminalization of Black sentience 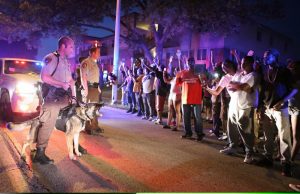 Sentience refers to having capacity to engage in human-like behavior. People typically use this term when referring to the mental capacity that distinguishes humans and higher life forms from plants and lower life forms. When we think of things like the experience of pain, a sentient being responds to pain not just by realizing the hurt but by lashing out at the source of pain in order to make it stop.  If I were to kick your mother, your instant reaction might be to harm me in order to stop me from doing harm to her.

This natural response is fettered throughout history. People expect that when you do harm to someone you can reasonably expect that person to fight back. What’s amazing about media discussions of Ferguson is that the emphasis on peaceful protest is such a constant refrain. It’s an old refrain, belonging to an age old song that echoes throughout American history –  the fear of Black sentience.

American colonists damaged British ships in the story we call the Boston Tea Party.  That event is not narrated in a way that emphasizes a fear of violence. Embedded in the conventional story of the Boston Tea Party is the right for sentient people to be upset about injustice. The colonists’ actions are not described as irrational violence and looting.  Phrases like “give me liberty or give me death” are heroic when uttered by Patrick Henry but are frightening when they come from a Black person’s mouth.

No one refers to the uprising in the Warsaw ghetto in Nazi-occupied Poland as an irrational demonstration of violence. It was a just and reasonable response to Jewish oppression in Europe. No one would have lectured to Jewish people in Germany about why they needed to be non-violent.

Much more recently we have the story of 9/11. People where so willing to use violence that America entered into a decade of wasteful wars in Iraq and Afghanistan. There was no strong call for non-violence.  The feelings of pain where deemed so legitimate that it produced hatred for Muslims.  There was no strong public campaign against the hatred of Muslims.  In fact, the federal government created a law (the “Patriot Act”) that established an entire system that institutionalized hatred and bigotry toward Muslims.  Yet people continue to call for calm in Ferguson as if there is no legitimate reason for anger and retaliation.

I want to be clear; ultimately a violent uprising won’t be effective at producing lasting change. But I feel it is essential to bring attention to the anti-violence moralizing that people do in their commentary on Ferguson. It’s as if Black people in Ferguson were not entitled to the feelings of fear, threat and anger that people in this country find reasonable when it comes to motivating whole wars of aggression abroad or even the domestic state sanctioned killings we call capital punishment. We are asked to be non-violent when everyone else uses violence.

A stunning example of this is the highly militarized presence of police in Ferguson. It’s as if Black people are criminal if we express the response to pain that any other community would feel.  The focus on the “looters” is a narrative that is used to justify the deployment of riot gear and military weapons, even though most of the protest have been peaceful.  It seems that the only violence that matters is violence against white people (or the state). When people express their support for non-violence what they are really saying is be non-violent toward white people.

How arrogant is it in a country that tortures suspected terrorists that Black people are told that our response to violence must be non-violence. Black people should not have to bear the existential burden of our legitimate human responses being criminalized.

It is certainly legitimate to have debates about effective strategies, but it is not legitimate to burden us with the anxieties white people have engineered about Black people’s right to respond to our pain. When the governor imposed a curfew it was as if he were instructing children to stop horse playing, instead of talking with people he supposedly represents about their shock, pain and fear.

Listen, the point that I am making is simple.  Black people get to be mad. Don’t patronize us by telling us that we have a moral obligation to be calm, because truthfully in this white supremacist society white people have no right to expect anything less than violence. White people should be thankful that Black people have such a strong commitment to the love of all human beings that we opt to seek peaceful solutions to a people who have demonstrated a total lack of regard for our humanity.

PrevPreviousUp For Debate – A rift in urban debate groups reflects prickly questions about the role of nonprofit groups in minority communities
NextAUDIO: Positive Youth Programming in Baltimore – Why It MattersNext