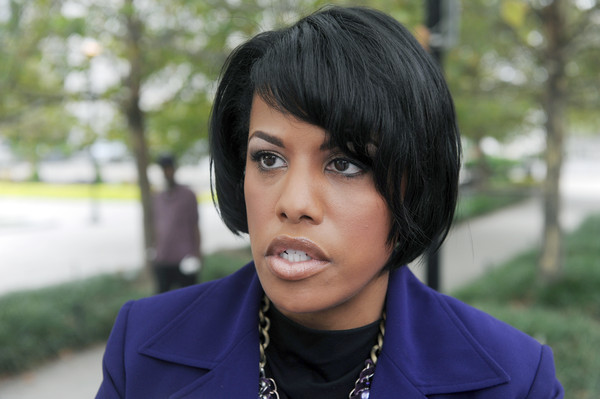 Mayor Stephanie Rawlings Blake: A Mannequin in the Shopping Mall of Democracy.

Most of what we see in politics is “concern” for the humanity of the most vulnerable people in our society.  I am sick of the games and pretend outrage.  We have to stop letting people get away with using “causes” and “issues” as fancy rhetorical tropes that are trotted out to gain the favor with the masses.  Mayor Stephanie Rawlings Blake did an interview this weekend that I think exemplifies the way that those in power reduce structural violence to mere issues that can be used for their political advantage.  Her political power is rooted in the Democratic Party machine that has a strangle-hold here in Maryland.  This machine has no genuine interest in improving the collective condition of Black people in Baltimore, but is interested in preserving the status quo.

Human suffering is a sellable commodity.  It has tremendous currency in politics and popular culture.  Our society is saturated with the use of people’s suffering in service of political agendas that do not serve the most vulnerable people of this city.  This weekend the mayor addressed the Ray Rice incident and the incident of police brutality that was caught on tape at the intersection of Greenmount and North Ave.  What has been tragic is that in both instances what caused the issues to gain steam in the media is seeing the actual video of these incidents.

Why did it take people seeing the video in order for people to respond with outrage and to all the sudden become crusaders for the fight against domestic violence?  This is an indication of how disingenuous people are.  There is all this scrambling going on to talk about domestic violence (largely by folks who do not do work on the issue) merely because people actually saw the video.  In our book, The Black Book: Reflections from the Baltimore Grassroots, there is an entire section dedicated to this notion of the spectacularization of Black death and violence.  In the chapter entitled “Spectacular Blackness” we describe how our society uses the “white gaze”, which causes us to be more responsive to visual and dramatic scenes of violence as oppose to the structure of society itself that perpetrates violence in our day to day lives.  What this means is that we respond viscerally to images and representations of violence more than the actual violence that structures the society in such a way that domestic violence is so pervasive.  I don’t want to rehash the on-going conversation about this incident, but I wanted to mention it here to shed light on the idea that our outrage is often a response to our own visceral feelings and not a genuine concern for human suffering.

On the issue of police brutality, my question to the mayor is “why now?”  What made this moment so much different than 2 years ago when people like Delegate Jill P. Carter put a bill in the Maryland General Assembly called Christopher’s Law to address police brutality?  Even if she didn’t believe in the bill, where was her voice when there were numerous instances of police brutality in the past?  During her interview there was no indication that she thought that this is a new problem.  So what could be the cause of her concern?

The Democratic Party is moving more to the left, and over the past couple of years has taken up issues that many key people in the party wouldn’t have taken up before.  On issues like Ferguson the Democrats have embraced the issue of police brutality in a way that it hasn’t in the past.  One could argue that the death of Trayvon Martin was the beginning of a shift where even white liberals were willing to acknowledge the issue with police brutality and give it significant air time in the media.  Let’s take the mayor’s appearance on  Morning Joe over a month ago.  She seemed to have such a concern for the things that the people of Ferguson have been through as she urges Joe Scarbourough to be understanding of the protesters in Ferguson.  This is a position that flies in the face of what we expect of her here in Baltimore in addressing issues of institutional racism and white supremacy.

Let’s assume for a moment that she was completely genuine in her interview on Morning Joe last month (which I am inclined to do because I believe in giving people the benefit of the doubt), why would she not have demonstrated this level of concern as the mayor of a city that is deeply tangled up in the web of white supremacy that would cause major problems of police brutality in Baltimore in the past?  Why is she suddenly interested in amending the Maryland Law Enforcement Bill of Rights?

The answer? She is a mannequin in the shopping mall of democracy.  The people of the Democratic Party do not have a genuine concern for the quality of life of Black people, just as the Republicans are not invested in addressing white supremacy.  As Black people we need institutions and organizations that are geared specifically to address our own issues.  We are currently in a situation where our Black elected officials are reliant on a white controlled and dominated Left/Democratic Party that will take up our issues in order to score political points and advance their own agendas.  So what we have is our mayor following the agenda of the Democratic Party which is to begin to openly talk about this issue in order to develop a more secure handle on Black voters.  This is the only way that we can explain her change in her position on this issue.  I find it hard to believe that she has a genuine concern for the issues of police brutality given the fact that I have not once heard her mention the idea of institutional racism in the same sentence as law enforcement.  But maybe that’s just me…

What makes me the most sick is that we let these people get away with pretending to really care about improving the lives of Black people.  My intent here is not to suggest that the mayor is an evil person with malicious intent toward Black people, I want to suggest something a little bit more insidious.  Black inferiority is deeply embedded in the collective consciousness of Americans.  So much so that it operates on our psyche in ways that has political implications.  Many Black elected officials do so much work to gain favor amongst well-to-do white folks.  We like when white people tell us that we are intelligent, when they give us money or when we are given leadership positions in institutions that they control.  We are easily pacified by tokenistic gestures of inclusion at their parties, fundraiser, and events.  We love being showcased on their media outlets, and we love getting awards that recognize us.

I say all this to say that the mayor is not unique in that her ability to gain favor among white wealthy power brokers in Baltimore as the basis of her power.  This is common practice of Black elected officials around the country, with a few exceptions.  I don’t know her personally so I do not want to make authoritative statements about what she thinks about herself, but the point I want to make here is that she is caught up in a Democratic machine that uses our Black bodies to give life to its agenda.  The ego starvation that Black people have experienced due to the fact that we are bombarded daily with representations of Black criminality and Black inferiority creates desire in Black people to prove that we are in fact someone important.  We invest so much time in the presence of white people who have tremendous wealth that we don’t even take the time to engage the people of this city who are an untapped resource that has the potential to benefit everyone.  We allow the Democratic party to promise that our issues will get addressed, but are intent on settling for crumbs.  This allows us to be relegated to being tools of white people’s political power in exchange for symbolic gestures.  I say enough is enough.

Our solution? The development of independent Black organizations and institutions that can put up elected officials that are truly connected to our issues.  We need the organizational fortitude to demand that we don’t have to wait until the Democratic Party decides to care about our issues to speak up for our people.  The work of developing these institutions sounds simple, but requires an extraordinary amount of work.  But it is the only work that will give us true liberation.  Do not be fooled by Democratic Party operatives who pretend to be invested in our communities.  Honestly, I’m sick of the games…  As Sista Souljah once said “I am not in the business of dillydallying with the minds of Black people.”  Let’s get to work.

PrevPreviousAUDIO: “What Would You Do If You Were Mayor Of Baltimore?”
NextThis ‘Diversity’ Stuff Can Kill You: What I Learned as a Black Man at America’s Least Diverse Elite College Next