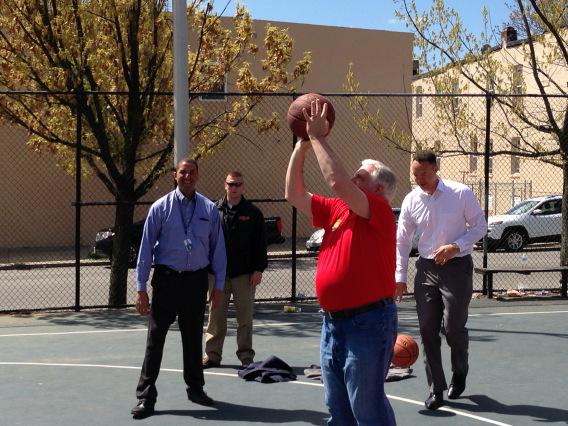 Media follows people, just not THE people, in Baltimore

On Tuesday, a beautiful thing happened in Baltimore. One media outlet covered it, while dozens covered the violence.

It is impossible to truly know what’s going on in Baltimore if you’re not here.  The complexity of the dynamics and the history means even the best media coverage can provide only a snap shot.

The recent images of politicians shooting basketball at the Cloverdale basketball cohurt near Druid Hill Park is a prime example of the problem.  Larry Hogan and the establishment politicians visiting Sandtown to play basketball are especially frustrating given the story from the Real News Network about Friend of a Friend. Friend of a Friend is a grassroots organization which had done grassroots work in Sandtown-Winchester for years, raising money independently to rebuild a basketball court in the Gilmore Homes housing project only to be stalled by bureaucratic red tape.

These basketball-playing politicians are reacting to an event that happened yesterday which was almost completely ignored by the major media, a community meeting and cookout held at the court to show unity and community against the narrative of violence.

Politics in most cities is reactive; Politicians follow popular opinion and tack back and forth with the prevailing wind. This incident has magnified this dynamic because the people involved, not only black but poor, are so ignored in the dominant political discourse even co-option comes to them late.

This selective media portrayal produces a flawed narrative around black leadership and political movement. The media looks for personalities– those with clout, money, and power– and traditionally frames their stories around them. This limits the narrative around black leadership to what is too often a simplistic notion of elite “enlightened” leadership or charismatic black (usually male) leadership. This limits conceptions of who can be truly Black to not only frame out women, but also grassroots blacks of all genders who do not fit the traditional charismatic or elite molds. This is shown by the fact that the Cloverdale story was picked up by larger media outlets only after it was linked to a professional basketball player.  This obscures the fact that these events happen consistently in Black neighborhoods, church cookouts, youth groups, boy scouts, and other organizations continuing the growth of the community despite overwhelming structural disadvantages.

Another prime example of this is the march held Wednesday by student organizers, many associated with the Baltimore United for Change Coalition. While the media continued to replay footage of a burning CVS, 5,000 youth were peacefully demonstrating for justice. Wasn’t this event worth more than just a couple of minutes in the 11 o’clock news?  The feat of organizing and fearlessness of young people like Korey Johnson (pictured left) doesn’t fit the “Baltimore as Thunderdome” mold, and thus is subsumed by repetition of stale notion of black criminality and elite leadership.

Black people do not need elite or charismatic leaders to save them–they need recognition of their indigenous cultural resource and for people to invest in them not anointed representatives claiming to speak for them.

The organizers of the community meeting and cookout Tuesday were regular people, not super heroes, not the ivy league educated, not pastors or media personalities, but regular people. As hard as they try, the media will almost never know about these moments of everyday leadership which define the social life of our black communities, so often framed as deficient and lacking in cultural resources. This is wrong, but it happens because the culture and experiential resources of these communities simply do not fit within the established boxes of American media. Alternative resources like the blogosphere and independent, commercial-free news sources offer some hope, but the problem is broader than a lens, and bigger than a basketball court. The very way in which we conceive of black leadership needs to change.