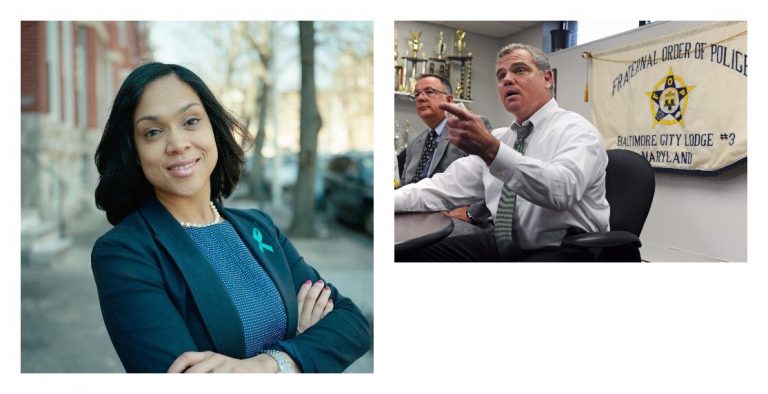 Fear of a Black Prosecutor: The Maryland FOP’s Subtle Slander of Marilyn Mosby

In debate, one often sees the use of “straw man” arguments: arguments built up to look robust, but ultimately designed to mislead and muddy and otherwise divert effective debate.

First, after expressing regret for the death of Freddie Gray, the FOP declares the death is not the officers’ fault. One wonders what the logical conclusion of the line of argumentation is: did Freddie Gray kill himself, a hypothesis roundly rejected by a majority of medical analysts? Was his death simply an act of God, a tragic act of happenstance? We may never know exactly what happened in the back of that police van, but as Ms. Mosby comments in her speech, we DO know that there was a pattern of negligent practices that led to Mr. Gray’s extended exposure to harm through improper restraint and callous disregard of his calls for medical attention.

Mr. Gray was not shot like Mike Brown, nor strangled like Eric Garner, but he was folded like a pretzel and exposed to harm by negligent, potentially intentional harm during an illegal arrest.

The FOP’s second set of arguments is even more malevolent. Claiming Ms. Mosby is personally compromised by her relationship with the Gray family’s lawyer, William “Billy” Murphy, and the family itself, the FOP claims Ms. Mosby should essentially recuse herself from the case.

This is the definition of a circular argument. Anyone who is anyone in the Baltimore legal scene has a relationship with Billy Murphy, and any state’s attorney worth her salt would develop a relationship with the Gray family. In effect, the FOP is accusing Ms. Mosby at being too good at her job. The FOP’s claim that that Mosby’s husband’s political ambitions makes her unfit to prosecute this case is also a specious argument: it sounds logical, but it ultimately does not make sense. The only logical problem with Ms. Mosby’s husband’s political ambition is that it would make her so desiring of a conviction that she would cut corners, and given the reality of the international media spotlight on this case it is unlikely such impropriety would go unnoticed.

The fundamental problem with the FOP’s argument was brought up by Ms. Mosby herself: since she is elected by the people, she is accountable to them, and thus public pressure can encourage the prosecutor to do her job in a manner most reflective of the needs of people. Conversely, with a special prosecutor, there is no mechanism of accountability. The FOP’s sleight of hand begins to fall apart here: the trick is the FOP clearly has a disregard and disrespect for the democratic process, confusing democratic accountability with mob rule, as their discussion of the so-called “lynch mob” of protesters proves. This argument is ridiculous.  It has been 20 years since a police officer has been convicted of an on-duty murder of a civilian and events from Ferguson to New York show that police are given the maximum possible leeway in the court of law, yet the FOP maintains their claim that the democratic process is rigged against them. A special prosecutor, without the democratic accountability of Ms. Mosby, could be subjected to special interests, promises of cushy jobs or consulting gigs in return for a less than vigorous prosecution.

Given all this, it seems the FOP assumes a Black female prosecutor would be too swept up in a public “hysteria” to be effective, which says more about the FOP than Ms. Mosby.

The democratic movement of the grassroots in Baltimore shows the public is no longer willing to fall for the FOP’s tricks.