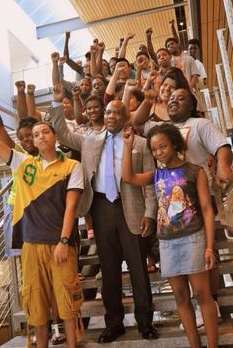 The three-week program, sponsored by Leaders of a Beautiful Struggle (LBS) and Morgan State’s Institute of Urban Research, brings together top African American high school debaters to develop debate skills in public policy and politics from an urban perspective.

“There isn’t a debate camp that focuses on Black youth development,” said Adam Jackson, co-founder of LBS, a youth-led think tank and political action committee based in Baltimore. “Most debate leagues just discuss politics and policy, but are race neutral.”

Jackson said he wants his student debaters to be able to relate their own issues on a national scale. He said the purpose of ECLI is to allow students to develop their own Black identity while using social justice, history and different art forms such as music and poetry to build a compelling argument.

During one workshop, Geor Lee, lab facilitator for the ECLI, worked on teaching the students performance debate, which incorporates both personal experiences and noted phrases from “organic intellectuals” such as rappers like Lil’ Boosie.

For one assignment, the students were asked to write an open letter to the mother of Trayvon Martin, the 17-year-old who was slain in a confrontation with George Zimmerman while walking from a convenience store.

“Take advantage of being heard and felt, not just seen,” Lee instructed the students.

During the camp, students will also work on policy briefs for five debate topics approved by the National Federation of State High School Association. ECLI students will focus on U.S. policies on economic engagement in Latin American countries.

“If you are poor and from west Baltimore, you can relate to the struggle of a poor person in a developing country as it relates to policy and politics,” said Jackson.

During the camp students are split into two workgroups, JV and Scholars. The JV work group is specially designed for novice debaters with two or less years of experience. These students will learn the fundamentals of debate and argumentation. The Scholars are students with three or four years with debate experience, who are competing for national spotlight in the field.

Dr. David Wilson, president of Morgan State University, said he is enthusiastic about planning host to the group of students and hopes the experience pushes them towards wanting to pursue a college education.

“In order for any young person today to be successful they really need critical thinking skill… they need to understand how to form and defend a point of view,” said Wilson. “We thought Morgan was the perfect place to begin to imbue young people with these types of skills.”

ECLI students, many of whom have never set foot in Baltimore before, will also tour a variety of Baltimore’s Black owned businesses and cultural attractions such as Darker Than Blue restaurant, Apples & Oranges market, and the National Great Blacks in Wax Museum.

One program participant, Mustafa Porter, 16, who attends Frederick Douglass High School, said he randomly fell into debate a year ago when he walked into a club meeting at his school.

“I thought it would be hard stepping into it with seasoned people, but the concepts are pretty easy,” said Porter. “Now I am just working on learning the linguistics, some of the students in the program eat, sleep, breathe the linguistics… You have to live debate.”

Jackson said policy debate is one of the most rigorous forms of debate because it not only helps the debater become a skilled orator, but gives them the ability to think through complex issues and makes them a better researcher.

“Debate at a fundamental level takes your own God given gifts and enhances it to create a world class leader,” said Jackson.