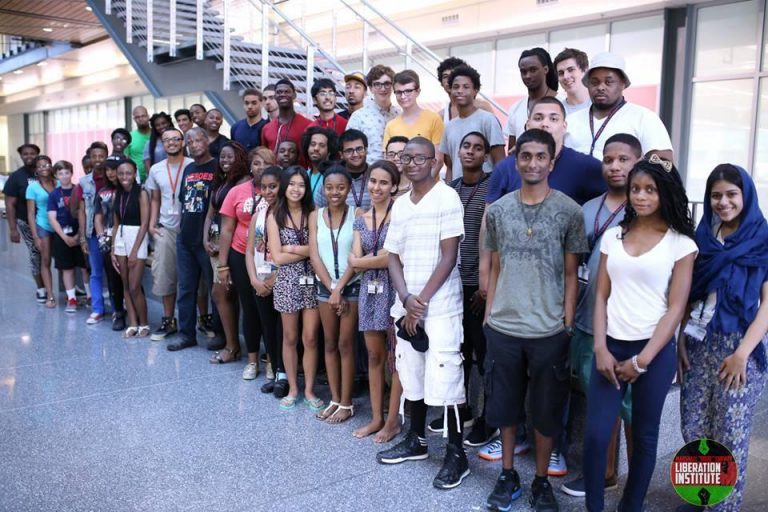 In a classroom on the campus of Morgan State University, a group of high school students gathered for a lecture on the contours ofAfro-pessimism. Afro-pessimism is a school of thought that argues multicultural theoretical frameworks err in equating the experience of other ethnic groups with the Black experience, and that American society is largely organized along the basis of a Black-White binary. These students, from all over the country, are attending the Eddie Conway Liberation Institute (ECLI), a camp for high school students on the national debate circuit that emphasizes a style of debate that uses non-traditional theoretical perspectives and focuses on how the notion of race informs policy and affects people of color in the United States and throughout the world.

Leaders of a Beautiful Struggle (LBS), a policy think-tank based in Baltimore City, organize the three week residential camp. Now in its second year, the ECLI is the only national debate camp held at a historically Black institution as well as the only debate institute in the country organized and run by Black debaters, according to Dayvon Love, director of Research and Public Policy for LBS.

Daryl Burch, one of ECLI’s instructors, began his debating career as a high school student in the 1980s and has been coaching since he completed his collegiate debating career at the University of Louisville in the 1990s. Together with Dr. Eddie Warner, also of the University of Louisville, he helped create and establish the practice of race-based performative debate and bring it into the mainstream policy debate world.

“It’s more of an activist movement type,” explained Burch, “centered around empowerment, liberation, and social location, that kind of says we want students to engage in critical thought and critical thinking as a means to empower themselves, experience what I call epistemological growth, so to now have a different [perspective] on life that I can go back into communities and help make social change.” The classroom sessions offered at the camp introduce various perspectives on race and the way it shapes social organization and policy, but always with an eye to how these perspectives can be effectively incorporated into persuasive arguments, the ultimate end of any debater.

For Sequoia Smith, from predominantly White Minneapolis, Minn., the ECLI has exposed her to the ways race rears its head in American society. “I never realized how much it affects my life every day, and so I feel like I have been taught to critically analyze everything I come in contact with,” said Smith.

Geordano Liriano served as one of the instructors at this year’s camp and is preparing to enter the University of Iowa in the fall on a debate scholarship. Liriano explained how his experience with debate camps during his middle and high school career demonstrated the vacuum that the ECLI fills in the debate world. “I would go to debate camps that were predominantly Anglo – affluent, White students who debated about politics and policymaking in a very European framework,” said Liriano. “And a lot of them didn’t talk about things like social location or didn’t talk about things like African diaspora, or things like culture and culturally-relevant things.”

Korey Johnson, currently a debater at Towson University who also served as an instructor at this year’s camp, spoke to the role non-traditional theoretical sources play in informing one’s approach to policy issues. “Traditional debate is oriented more towards affirming policy action and looking at the results of policy action . . . What Dayvon (Love) and Nick Brady (of LBS) pushed me to do was look at those things more critically, at who policy affects, and how does it affect them, and why it affects them,” said Johnson. For Burch, the ECLI and debate in general also serve as a palliative to the lack of non-European perspectives that most students experience in secondary education in the United States. “If Black history can’t be taught in school and there’s not a way to fit it within the curriculum, then sometimes [in] extracurricular activities you do have that luxury and flexibility to incorporate some of that genre into their argumentation. I think that helps kids have a more balanced educational experience throughout their high school career,” said Burch. –

PrevPreviousWhite power and Black voices: Why we can’t rely on “good white people”
NextAUDIO: Leaders of a Beautiful Struggle Update with Marc SteinerNext