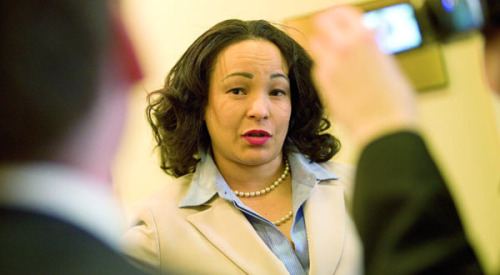 As many of you may be aware, last year after the uprising in Baltimore the Speaker of the Maryland House of Delegates, Michael Busch, and the President of the State Senate, Mike Miller, established a police reform workgroup chaired by Delegate Curt Anderson and Senator Catherine Pugh. The purpose of this workgroup was to pull together law enforcement, advocates and other stakeholders to recommend law enforcement reform legislation to legislators.

Our early observation of the composition of the police reform workgroup was that the strongest advocates on issues of police reform were excluded, most importantly Delegate Jill P. Carter. This meant that it was highly likely that the reforms that most substantively shift power into the hands of the community would be excluded from the recommendations.

The first recommendation is that only sworn law enforcement can investigate incidents of police misconduct in the current version of the LEOBR. Without amending this part of the LEOBR the community will not have the proper tools it needs to hold police accountable. The second item involves the police trial boards. Currently, the trial board that determines discipline for police officers accused of misconduct is composed exclusively of law enforcement officials.

Delegate Carter will introduce a bill that will include these amendments to the LEOBR. We need to urge legislators to support Delegate Carter’s bill, in addition to the leadership’s recommendations. Without the provisions included in Delegate Carter’s bill, we will have failed to address the fundamental issues of police reform. This is not about improving community/police relations. This is about shifting power into the hands of the community so that we have to necessary tools to protect us from police brutality.

Call and email Delegate Mike Busch, Senator Mike Miller, Senator Pugh and Delegate Anderson and urge them to advocate that the additional amendments to the LEOBR, reflected in Delegate Carter’s bill, be included in police reform legislation.