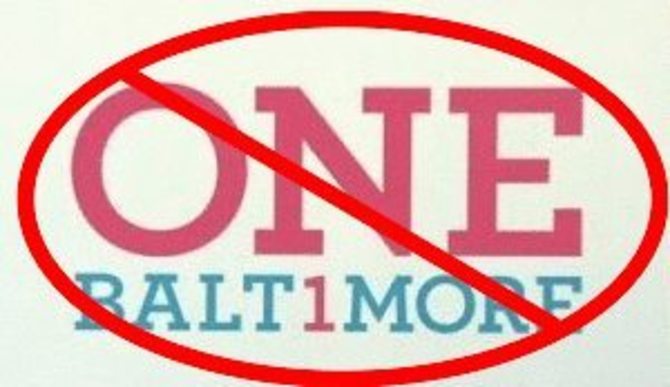 Debunking the Illusions of #OneBaltimore

The #OneBaltimore initiative that was announced by the Mayor draws on a historical narrative that has been effective at producing an illusion of racial progress while maintaining racial inequality.

This historical narrative is rooted in the idea of racial integration as an effective response to the system of white supremacy.  Harold Cruse in Crisis of the Negro Intellectual described integration as a “sociological fraud.”  What makes racial integration such a flawed concept as a response to white supremacy is that it is based on the premise that justice is best achieved by bringing Black people in closer proximity to our white counterparts.  The solutions that are often narrated to us about achieving racial equality suggest that “bringing people together” is a sufficient answer to addressing the problem of racial injustice.  This is a deflection however; the idea of bringing people together is a convenient way to avoid the question of power.  Black people need to focus on changing the current social arrangement which relegates us to relying on white dominated and controlled institutions for our livelihood.  Black neighborhoods and communities in Baltimore are not positioned in such a way to substantively guide the trajectory of our city’s policies.  This is not because we are incapable of doing so, but because we are not sufficiently organized around the principle of communal based independent Black institution building as the main solution to our problems. Instead of challenging the nonprofit industrial complex, the illusion of inclusion allows for institutions to benefit from our oppression.

Over the past couple of decades the mainstream political discourse has often excluded calls for Black people to develop institutions which are accountable to Black people as a group.  There are a few charitable organizations that may target Black people specifically, but the call for the creation of civic, financial, cultural and political institutions that are accountable to the masses of Black people is often framed out of the conversation.  Those kinds of ideas are said to be too radical, and make white people too uncomfortable.  The reason that this concept is so taboo is because it gets at the fundamental question of power.  If we develop our own institutions and are able to have the resources to make them thrive and function then this creates a context where the communities that are most directly affected by systemic oppression can have authentic empowerment.  What we have currently are a series of institutions that claim to want to empower the community but are hampered by two fundamental problems.

The first is that there is an entire industry of people that purport to be experts on Black suffering that are leading the institutions charged with making Baltimore a better place.  Many of the traditional nonprofits and philanthropic organizations are filled with well meaning people but have internalized notions of Black inferiority that inform their human services approach to dealing with economically challenged Black communities.

This is manifested in an over-emphasis on efforts to “fix” Black people’s behaviors instead of facilitating the development of indigenous institutions that would actually empower the community.  This is not to say that we should not be working internally to address our own communal issues, but we should be doing that ourselves and there should be investments made into our capacity to do so.  What we currently have are institutions that are run by, accountable to or controlled by white people who are not indigenous to the communities that are struggling, managing the affairs and efforts to improve the quality of life of predominately Black communities.  This formula historically has been ineffective.  We don’t need people to tell us how to fix our communities, we just need the framework and resources to do it ourselves.

What is even more unfortunate is that there are these institutions that are hustling on the miseries of Black suffering.  Many of the organizations that claim to want to help Black people are making a living off of us.  The industry around people being experts on us creates financial opportunities for people to manage our suffering.  This includes executive directors of nonprofits, elected officials, public health professionals, educational experts, and people from many other fields who posit themselves as having the capacity and knowledge to manage efforts to empower Black people.  The Mayor’s #OneBaltimore initiative leaves this dynamic intact by attempting to rebrand the same institutional arrangement, where narratives and images of Black suffering are used to make other people comfortable materially and psychologically- feeling good about “helping” but richer in pocket, while leaving us at the behest of these organizations.

The second fundamental problem is that we have been socialized not to see the need for having our own institutions.  Currently many of the organizations that proclaim to care about our issues are structurally accountable to a board of directors that is usually made up of corporate leaders.  So even when organizations claim to be addressing the issues that plague our community, there is no structural mechanism that exists in these organizations that make them FORMALLY accountable to the communities they serve.  Even when there is “community input” ultimately, the power to move the organization is ultimately in the hands of an executive leadership and board of directors.  Having organizations that we control allows us to build our own capacity in our own communities instead of relying on others to do it for us.  We have gotten so comfortable with the idea of integration that we think justice is being included in other people’s institutions instead of being self reliant.  There is a syndrome that many of us have where we implicitly see “good schools” as white schools.  We have been socialized to think we need legitimacy from white dominated institutions in order to be legitimate in civil society. I want to be clear, the argument here is not that we should aspire to have Black individuals in leadership positions of major institutions that serve Black people, my argument is that we need communal based independent Black institutions that have mechanism of accountability that are designated specifically and exclusively to the community that is being served.

Some people might read this and assume that my argument is one of militant separatism.  That is often how we are socialized to read arguments like this when they are made by and about Black people.  The argument I am making here for Black people is no different than what other ethnic groups do for their people.  Jewish people have organizations that are designed to provide them social, political and economic independence so that when they encounter larger civil society, they do so from a position of strength.  There is the Korean Merchants Association in Baltimore that organized against an effort to reduce the amount of liquor stores in Baltimore because it uniquely affected their community.  You do not hear people describing these efforts as separatist.

The argument I am making is that we should have the institutional capacity so that wherever we are we can act from a position of strength instead of being dependent on the goodwill of others.  This is not separatism, this is just common sense.

All of these dynamics are able to go unaddressed because of our allegiance to the idea of racial integration as the best response to white supremacy and systemic violence.  We let white people and their Black gatekeepers center the conversation about justice around getting along, instead of focusing the conversation on how to recuperate the resources that were extracted from the dehumanization of Black people.  As it relates to conversations about investments in neighborhoods in Baltimore, the only relevant conversation is how do we get white folks to relinquish the resources that they have gained through generations of exploitation and economic brutality toward Black people, to well organized and independent Black led and controlled organizations?  The #OneBaltimore Initiative is a distraction from that conversation.  It is another attempt to center the conversation broadly around investment in neighborhoods so that the same people can continue to make money off of our suffering, and an attempt to center the conversation about getting along.
What we have in our leadership are people who are either too scared to call this dynamic out, people who benefit too much from it to address it, or people who are just too naive to see this.  White supremacy is central to how our society is organized.  The only sustainable, effective way to combat it is to cultivate the development of independent Black institutions.  If that is not included in how we address the issues that face our communities, then you don’t have an effective, sustainable solution.  The #OneBaltimore Initiative is an example of the problem, not the solution.